When the burned and blasted remains of Russian tanks and artillery were first lifted from cranes on Saturday and lined up along Kyiv’s elegant Khreshchatyk Street — the Ukrainian capital city’s answer to New York’s Fifth Avenue or London’s Oxford Street — many residents were moved and unsure what to make of the defiance.

By Monday, viewing the wreckage of Russia’s killing machines had become something of a pilgrimage. Thousands of Ukrainians, all too familiar with the vehicles’ destructive power, swarmed the display.

The tanks were placed ahead of Wednesday’s Independence Day celebrations, marking Ukraine’s 1991 break from the Soviet Union. The commemorations have extraordinary weight this year, coming as Ukraine is battling Russia to retain its freedom.

There were tears and smiles. Anger and sadness. And many pictures snapped in an attempt to capture the strange and jarring scene.

One man peered inside a burned-out armored personnel carrier and spat on charred and tattered Russian uniforms. Three children ate ice cream sandwiches with their mother, the shiny metal carcasses of Smerch missiles at their feet. A young couple peered into the hollowed-out core of a tank.

Visiting the display has become something of a pilgrimage for thousands of Ukrainians.

“Remember, this is not just a tank,” Volodymyr, 32, told his girlfriend, Iryna, 26. “These were real people. People who died in the flames here.”

More than 1,300 people were killed in the Kyiv region as Russian forces tried and failed to take the capital, according to a recent tally by the local government. But Volodomyr said it was important to remember that the Russian soldiers are people as well. And in this tank, they likely died in agony.

“It is all just so sad to see these things here in the center of Kyiv,” he said. Until the first rockets fell, he said, he did not believe there could be a war like this.

“Never in the 21st century,” he said, repeating a refrain commonly heard in Kyiv before Feb. 24.

That morning, he said, the couple packed up their belongings “in five minutes” and headed to a small village. They returned to Kyiv in May to find a desolate city that had become a maze of checkpoints and shuttered stores.

“It was scary,” Iryna said. But the Russians failed to take the capital,. For Iryina, Kyiv was only just now starting to feel like the city she knew — albeit one with a curfew, daily air raid alarms, new stresses, less buzz and lingering uncertainty.

The damage to the Russian armored vehicles fascinated crowds.

The tanks bore witness to the devastation of towns engulfed by fighting. Displayed on the sides of many of the vehicles are the names of the places where they were destroyed and captured by Ukrainian forces.

“Nikopol,” said a man who gave his name as Andriy. 38, pointing to the name of his hometown on an armored personnel carrier near a Gucci store. “It is very strange and very sad,” he said.

Nikopol sits on the western banks of the Dnipro River. Across the water to the east, Russia is using working versions of these weapons to bombard his home. He does not know when, or if, he will return. 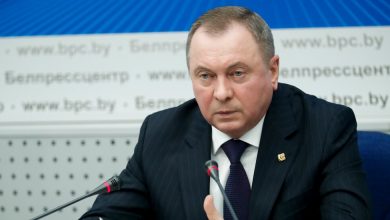 A ‘Bridge to the West’ Dies in Belarus, as Moscow Seeks More Help in Ukraine 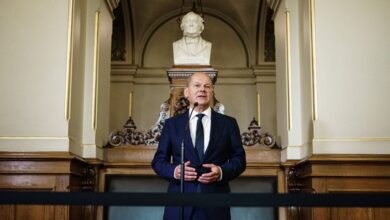 Germany’s Stony-Faced Chancellor Faces Critics on Nearly Every Side 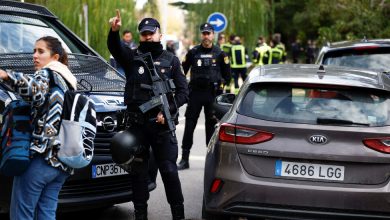