KHARKIV, Ukraine — It was a particularly dangerous time for a military-age man in Russian-occupied northern Ukraine, where Russian troops were losing ground before a ferocious Ukrainian counterattack this past spring. That was when soldiers from the occupying forces seized a young auto mechanic while he was walking in his home village with his wife and a neighbor, blindfolded him, bound his hands and shoved him into a bus.

It was the beginning of six weeks of “hell,” said Vasiliy, 37, who like most people interviewed for this article declined to give his surname for fear of reprisals. Shunted from one place of detention to another, he was beaten and repeatedly subjected to electrical shocks under interrogation, with little understanding of where he was or why he was being held.

He was far from the only one. Hundreds of Ukrainian civilians, mainly men, have gone missing in the five months of the war in Ukraine, detained by Russian troops or their proxies, held in basements, police stations and filtration camps in Russian-controlled areas of Ukraine and ending up incarcerated in Russia.

Thousands have passed through this sprawling, ad hoc screening system in the war zone, but no one knows exactly how many have been sent to Russian jails. The United Nations Human Rights Monitoring Mission in Ukraine has documented 287 cases of enforced disappearances and arbitrary detentions of civilians by Russia and says the total is almost certainly more, but probably in the hundreds, rather than the thousands.

A destroyed school bus in the rural village of Vilkhivka, outside the northeastern city of Kharkiv. The village was occupied by Russian forces this spring.Credit…Mauricio Lima for The New York Times

Vasiliy is one of a small number of people detained in Russia who have returned to Ukraine. He was released after about six weeks and eventually made his way back through a long, roundabout journey after a total of three months away. Back at work in an auto repair shop in the northeastern city of Kharkiv, he said he was just glad to have survived.

“It was shaming, maddening, but I came out alive,” he said. “It could have been worse. Some people were shot.”

Interrogators had asked for information on Ukrainian positions and military groups, he said, but the interrogations had often been pointless, as the next blow came before he could answer a question. “They don’t believe anything you say, even if you’re telling the truth,” he said. “You cannot prove your innocence.”

Other families, less fortunate than Vasiliy’s, have been left searching for missing relatives, torn with anxiety about where they are or even if they are alive.

“I go to sleep crying, and I wake up crying,” said Olha, 64, whose son was detained and beaten unconscious by Russian troops but was released after three days, and whose grandson, they learned from the International Committee of the Red Cross, is being held in a Russian pretrial detention facility.

Olha, 64, has not seen or spoken with her grandson, Mykyta, 20, in the months since he was snatched off the street. All she knows is that he is being held in a Russian pretrial detention facility.Credit…Mauricio Lima for The New York Times

Their village, Vilkhivka, outside Kharkiv, was overrun by Russian troops in late March. Warplanes were bombing the village, and the Russian soldiers told residents they had an hour to evacuate, she recounted in an interview. “They said that Vilkhivka was going to be razed,” she said.

Olha and several family members hurried with other villagers through the fields for five miles to where they were told a Russian military truck would take them to a waiting fleet of buses. Her son and grandson did not make it, so her husband went back to find them. As she sat on one of the buses, Russian soldiers pulled off two young men in bandages who she thought might have been wounded Ukrainian soldiers.

In front of the other passengers, the Russian soldiers beat the men, she said, and then shot them in the head. “They were left in that forest,” she said. “I closed my eyes and cried.”

Her grandson, Mykyta, 20, has not been seen since. Olha was evacuated with her daughter-in-law to Russia, where they were put up in a hostel. She returned home in July and was reunited with her husband, who had survived on his own. Her son managed to join them in Russia, and he and his wife have remained there to try to locate Mykyta.

They have no idea if he will face charges, Olha said, as they have no access to him, even by phone. The Red Cross could tell them only that he was in custody, she said.

A photograph of Olha’s grandson, Mykyta.Credit…Mauricio Lima for The New York Times

Most of the civilians detained by Russia in the war zone are men with military experience or of fighting age. In the occupied areas, Ukrainians with leadership qualities — activists, local officials and journalists — are most likely to be detained, human rights officials said. But many ordinary civilians have been caught up in what is often a chaotic and arbitrary roundup.

Vasiliy, the mechanic, said he had been picked up by chance because he was walking down a street in Tsyrkuny, northeast of Kharkiv, when members of the security forces were conducting a raid. His wife and a female neighbor were told to go home, but his hands were bound with tape and he was shoved into a bus as men in balaclavas burst into a nearby house firing weapons, forcing four men to the ground. Those men were then thrown into the same bus with Vasiliy.

Among them was Vadym, 36, a welder and mechanic who lived in Tsyrkuny with his wife and small son. Vadym had ventured out to get diapers and baby food for the toddler, according to his sister Darya Shepets, 19. She said that some of those detained had served as border guards during hostilities with Russia in 2014 but that he had no ties to the military.

“It is difficult to understand who was detained and for what,” he said. “They brought in this grandfather, who did not understand at all why he was detained. He was riding his bicycle with a sack of corn.”

Empty ammunition boxes litter the gymnasium of a burned-out school in the village of Vilkhivka, left behind by retreating Russian forces.Credit…Mauricio Lima for The New York Times

He added: “A young boy was brought in. He was just riding his bike to his grandmother’s.”

Detainees were hauled off individually for interrogation, which involved heavy beatings, including some to the head, and electrical shocks. “It is as if your whole body is pricked with needles,” Vasiliy said. Human rights officials have recorded similar accounts of electrical shocks being used.

“We were given food and drink once a day,” Vasiliy said. “Sometimes we could go without food for two or three days. There was no toilet; they gave us bottles to use. We slept together on car tires. No sanitary standards to speak of.”

He said Russian interrogators had been obsessed with rooting out members of Nazi groups — the main reason given by Moscow for its military operation against Ukraine.

“They said they had come to liberate us from the Nazis, from the Ukrainian authorities, so that we can live better,” he recounted. “I told them: ‘I worked all the time at the service station. I didn’t see Nazis. Everything was good.’”

His response enraged his interrogators, he said, adding: “They start to mess with you again. ‘You’re lying. You have Nazis here. Whole groups have been created. All your people have tattoos.’”

The four men seized in the house raid, Vadym and his three friends, were taken away in the third week. They have not been seen or heard from since. Vasiliy thought they were being released and even told Vadym to speak with his wife back in the village, saying she would help him with food for his toddler.

Darya Shepets, 19, with a bicycle belonging to her brother Vadym, 36, who is still in Russian custody. She has searched, largely in vain, for any information about him.Credit…Mauricio Lima for The New York Times

But when he got home at the end of June, he was shocked to realize that he was the only one to have made it back.

He got lucky when the leadership of the unit holding his smaller group changed and the detainees were suddenly turned out onto the street. Because of the fighting, they had to travel into Russia, where they were detained again, this time by officers of the Russian spy agency, the F.S.B., who Vasiliy said offered him money and a job to work for them.

He refused, and after three days, they let him go. “They probably realized that we were useless to them,” he said. Looking like a homeless man, with a large beard and unkempt hair, Vasiliy managed to borrow money from a friend of a friend to obtain new documents and travel through the Baltic countries and Poland back to Ukraine.

Vadym’s sister, Ms. Shepets, tried for months to find any information on her brother’s whereabouts, writing letters and scouring the internet. She ultimately learned from a Ukrainian government agency that he was in Russian custody. Then a friend found what appeared to be a prison mug shot of him in a Russian online chat room.

“I was hysterical, to be honest, because it was only half my brother,” Ms. Shepets said. “He is very thin in the photo. You can see hollows under his eyes, and his collarbones.”

The photo was subsequently removed from the social media group. “Now we don’t know anything — there is no more connection; there is nothing,” she said, wiping away tears.

Ms. Shepets with the troubling prison photo she managed to find of her brother Vadym, who remains in Russian custody.Credit…Mauricio Lima for The New York Times 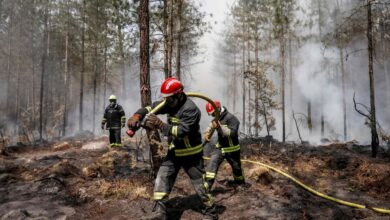 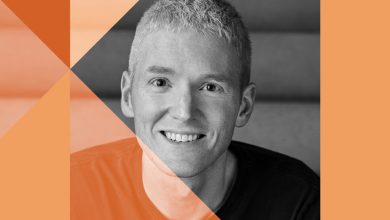 We Know Shockingly Little About What Makes Humanity Prosper 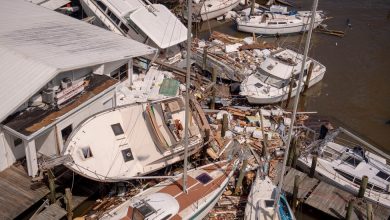 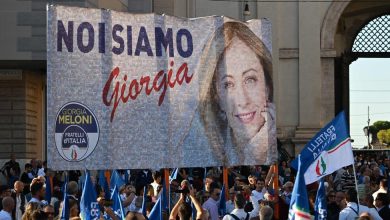 Italian Voters Appear Ready to Turn a Page for Europe