WASHINGTON — It is the element of President Biden’s foreign policy that overlaps most significantly with his domestic agenda: defending democracy.

His drive to buttress democracy at home and abroad has taken on more urgency as Russia wages war in Ukraine, China expands its power and former President Donald J. Trump and his Republican supporters attack American democratic norms and fair elections.

In a speech in Philadelphia last week, Mr. Biden warned about the threat to democracy in the United States and said American citizens were in “a battle for the soul of this nation.”

Even as he hammers home that message ahead of the U.S. midterm elections, Mr. Biden’s efforts to bolster democracy abroad are about to come into sharper focus. The White House is expected to announce a second multinational Summit for Democracy. And the National Security Strategy, which could be released this month, will highlight reinforcement of democracies as a policy priority, officials say.

On his most recent overseas trip, Antony J. Blinken, the secretary of state, announced in the Democratic Republic of Congo that the United States would help the country with “preparations for next year’s free, fair and on-time elections” — an emphasis on the sanctity of elections that echoes Mr. Biden’s defense of the 2020 U.S. presidential election against Mr. Trump’s persistent attempts to undermine its results.

Pursuing parallel policies to strengthen democracy at home and abroad allows the Biden administration to focus on a single central message, while the president’s political aides shape the identity of the Democratic Party around it.

And it gives Mr. Biden the standing to claim he is the torchbearer of an American foreign policy tradition that contrasts sharply with Mr. Trump’s isolationist “America First” approach and praise for autocrats. That tradition, liberal internationalism, revolves around the idea that global stability comes from democratic systems, free markets and participation in American-led multinational organizations.

“I think the rhetorical — and I would say sincerely moral — emphasis is welcome, as is the effort to draw democracies together,” said Larry Diamond, a scholar of democracy at Stanford University.

But in recent years, liberal internationalism has come under criticism from politicians, policymakers and scholars well beyond the Trump camp, and Mr. Biden risks being seen as naïve or imperialistic in centering his foreign policy on strengthening democracies.

Critics point to the disastrous wars and nation-building efforts in Iraq and Afghanistan that were carried out in the name of democracy. And they say the decades-long American push for free trade and open markets has fueled global inequality, environmental catastrophe and the empowerment of authoritarian figures and groups like the Chinese Communist Party, which now presents an anti-democratic but materially successful governance model to the world.

Officials in the Biden administration say they are approaching the defense of democracy with a sense of humility and are open to learning from other nations.

During a trip to the Democratic Republic of Congo, Secretary of State Antony J. Blinken announced the United States would help the country with “preparations for next year’s free, fair and on-time elections.”Credit…Pool photo by Andrew Harnik

On his travels last month, Mr. Blinken unveiled a new U.S. strategy for Africa that has democracy support at its core. But he also said at a news conference in Kinshasa, Congo’s capital, that the United States did not “want a one-sided, transactional relationship.”

He praised Congo for being a “strong participant” in the Summit for Democracy that Mr. Biden convened in Washington last year.

Congo is a nascent democracy. After a troubled presidential election in 2019, it had its first peaceful transfer of power. Mr. Blinken promised the country an additional $10 million “to promote peaceful political participation and transparency” in elections next year, for a total of $24 million in such programs overseen by the United States Agency for International Development.

Mr. Biden’s aides say their approach emphasizes “democratic resilience” rather than “democracy promotion,” unlike efforts by earlier administrations. They argue they are strengthening democratic nations and cooperation among them rather than pushing for changes of political systems or governments.

The framing is defensive rather than offensive, with a recognition that democracies are under threat, often from internal forces, in ways they have not been in decades.

And the officials also say global challenges like climate change, the pandemic and economic recovery are best addressed by democracies working in concert.

Furthermore, they argue, no other recent administration has had to rally partners and allies urgently to confront the challenges posed by both China and Russia, which in different ways are undermining what U.S. officials call the “rules-based international order.” Administration officials say there is a competition between democracies and autocracies to demonstrate which can deliver for their people and the world.

But in tackling those broad issues, the Biden administration will have to determine on a case-by-case basis whether to work with authoritarian nations or prioritize the principles in its “democracy versus autocracy” line.

“It makes it more difficult when you’re framing it this narrowly to reach out to those states you might need,” said Emma Ashford, a senior fellow on foreign policy at the Stimson Center. “It might leave out space for more global issues — the things you might need to talk to autocracies about.”

In the Middle East, Mr. Biden has visibly calibrated his position on autocracies, meeting in July with Crown Prince Mohammed bin Salman of Saudi Arabia despite vowing earlier to make that nation a “pariah” for the murder of Jamal Khashoggi, a columnist for The Washington Post, by Saudi operatives. Mr. Biden’s aides said the president was focused on working with Saudi Arabia on diplomacy with Israel, global energy security, competition with China and ending the Yemen war.

And the officials say the United States still needs to find ways to cooperate with Russia and China on certain issues: the nuclear programs of Iran and North Korea, climate change and the pandemic, for starters.

To oppose Russia’s war in Ukraine, the Biden administration has had to work closely with Hungary and Turkey, countries that, though members of the North Atlantic Treaty Organization, have become synonymous with the erosion of democracy.

Viktor Orban, the prime minister of Hungary, presents a complicated challenge. As he dismantles his country’s democratic norms and promotes nationalism based on ethnic and religious identity, he has emerged as a role model for many American conservatives. Last month, he got a hero’s welcome when he spoke at the Conservative Political Action Conference in Dallas.

And prominent American conservative political figures, including Stephen K. Bannon, Mr. Trump’s former adviser, have said they want to create alliances between right-wing populist groups in Europe — which often embrace anti-democratic values — and ones in the United States.

This growing intersection of politics abroad and in the United States brings into sharp relief what a senior Biden official calls the “interconnected” foreign and domestic policy efforts in the administration to strengthen democracy.

But Mr. Diamond said there is a shortfall in the material resources the administration has devoted to bolstering democracy abroad. For one thing, he said, the United States must ensure it and its democratic partners are perceived as militarily stronger than their autocratic rivals. That means not only repelling the Russian invasion of Ukraine, he said, but also accelerating weapons deliveries to Taiwan so the island can deter a potential invasion by China.

He added that the Biden administration also needed to increase its public diplomacy efforts to turn international opinion against Russia and China, pointing to the difficulties that U.S. officials have had in getting member states of the United Nations to approve resolutions condemning Russia for the war in Ukraine.

“Russia and China, with their vast propaganda apparatuses, have made very significant inroads, particularly in terms of elite opinion and dialogue,” Mr. Diamond said.

Officials around the world will be watching to see exactly how the United States carries out those programs — and whether Washington can now avoid the pitfalls that Western powers have had in trying to spread ideas and practices abroad.

At a news conference with Mr. Blinken in Pretoria, the foreign minister of South Africa, Naledi Pandor, said the United States should work with African nations as equals and use tools already developed by Africans.

“To come in and seek to teach a country that we know how democracy functions and we’ve come to tell you, ‘You do it. It’ll work for you’ — I think it leads to defeat,” she said. “So we need to think in different ways.”

Some analysts note that several African nations with strongman rulers were excluded from Mr. Biden’s democracy summit in December, including Rwanda and Uganda, to the potential detriment of U.S. policy on the continent.

“That selectivity already puts leaders and countries in a state of criticism to the U.S.,” said Bob Wekesa, a scholar at the University of the Witwatersrand in Johannesburg. “They are on a collision path already.” 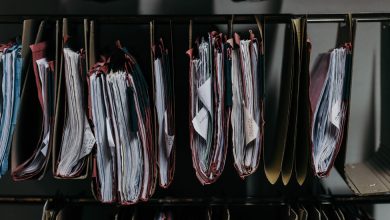 Where Online Hate Speech Can Bring the Police to Your Door 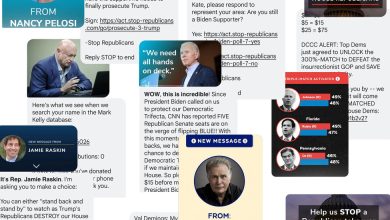 Fed Up With Political Texts? You’re Not Alone. 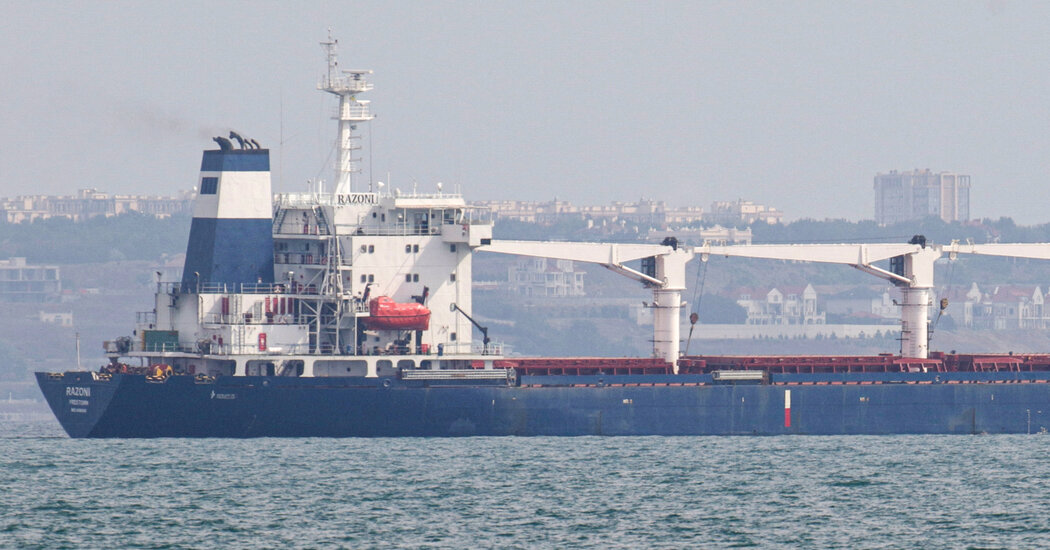 As a grain shipment heads to Lebanon, fighting intensifies on many fronts. 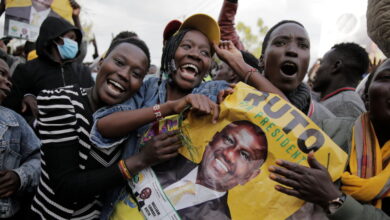 Kenya Declares New President, but Battle May Not Be Over