ATHENS — In a tense and highly confidential meeting in the senate chamber of the Greek Parliament, the prime minister’s smooth, handpicked spy chief politely evaded the questions of opposition lawmakers. They were demanding to know if he had surveilled a rival politician and a financial journalist investigating powerful business interests close to the prime minister.

But the inquiries mostly went nowhere. The committee’s chair, a political ally of the prime minister, Kyriakos Mitsotakis, discouraged follow-up questions, kept time to a minimum and ensured that the July 29 meeting, the content of which is still protected, was a dud.

But less than a week later, the charges of government spying detonated into a sprawling scandal that is now shakingthe very top of the Greek government, raising fears of widespread surveillance throughout Europe, and potentially putting another crack in Europe’s united front against Russian for its war in Ukraine.

Greece today is awash in talk of blackmail, Watergate and a secret police state that uses a pervasive, legal surveillance program with more than 15,000 orders last year alone to start, extend or cut off wiretaps in this country of 10.5 million people. Predator, a malicious spyware used to penetrate cellphones, has become part of the Greek vocabulary.

Mr. Mitsotakis, a conservative who took personal control of the intelligence portfolio in 2019 and whose own father was weakened by accusations of political espionage when he himself served as prime minister some 30 years ago, is in full damage-control mode.

He fired his loyal spy chief, Panagiotis Kontoleon, accepted the resignation of the government’s general secretary, Grigoris Dimitriadis — who is also his nephew — and gave a nationally televised address this week full of denials and proposals for reforming the spy agency, including adding a layer of judicial scrutiny to what many critics have called an in-house rubber stamp before wiretap authorization.

“I didn’t know about it and obviously I would never have permitted,” it, Mr. Mitsotakis said of the spying on his political rival, though the country’s intelligence agency comes under his oversight.

The scandal has echoes of the dark old days of Greece’s military junta, but it is also very much in keeping with the current European moment. Spain’s prime minister, Pedro Sánchez, has been a target of the powerful spyware Pegasus, so, reportedly, has President Emmanuel Macron of France, the former prime minister of Belgium and top E.U. officials.

There is growing concern that Europe, so proud of its privacy protections and rule of law, is rampant with listening devices and espionage at a moment when its democracies are being threatened by Russian aggression. So much so, the European Union is regularly checking devices.

Investigations into spyware should now “involve a check of the phones of all politicians and top level officials,” Sophie in ’t Veld, the chairwoman of the European Parliament’s special committee on spyware, wrote on Twitter on Tuesday. “To get a full picture of the spying activity by governments.”

Greece has now vaulted to the top of the worry list. Allies of Mr. Mitsotakis, a staunch defender of Ukraine, have argued that the scandal is not just a threat to Greek stability, but to the common cause against Russia.

“If I were Mr. Putin, I would be very happy if the governments that were so opposed to Russia would fall, ” said Adonis Georgiadis, a government minister and the vice president of Mr. Mitsotakis’ New Democracy party. While he stressed he was not blaming Russia for the hacking, he added that Russia had exerted influence in Greece before, “So if they did it in the past. Why not do it now?”

Turkey, too, he said, “could be” behind it all.

Mr. Mitsotakis, in his speech, also talked cryptically of the possibility of “shady forces outside Greece” working “to destabilize the country.”

Opponents say the government’s insinuations amount to a desperate smoke screen to avoid the obvious issue — that it had gotten caught spying on its own citizens and political rivals.

“It was obvious that the government was lying,” said George Katrougalos, the former Greek foreign minister of the main opposition Syriza party, who attended the confidential meeting on July 29, the substance of which he said he could not divulge. Opposition party officials have interpreted the nondenials of the intelligence chief about spying on journalists, and even on a 12-year-old migrant child, as confirmations that they had done so. And they have seized on the revelations of “legal” spying to cast doubt on the government’s categorical denials of being behind the Predator hacks.

The extent of the state’s surveillance might never have come to light had Nikos Androulakis, leader of Greece’s third-largest political party, the center-left Pasok-Kinal, not upgraded to a new iPhone.

Nikos Androulakis, a member of European Parliament and president of the Movement for Change Party, talks to media after filing a complaint at the Supreme Court in Athens over attempted spying on his mobile phone with Predator malware, last month.Credit…Agence France-Presse, via Eurokinissi/Afp Via Getty Images

In June, an aide suggested that he give his old phone to the new spyware-detecting lab in Brussels at the European Parliament, where he is also member. Technicians found he was the target of a cyberattack on Sept. 21, 2021, with the malware Predator, which is manufactured by Cytrox, a technology company that operates from Greece, and if installed through a phishing scam, can take over an entire cellphone.

“It can watch, it can record,” said Dimitrios Mantzos, the Pasok party spokesman, who said that the culprit had “to be domestic” because Greek fingerprints were all over the place. “It’s too Greek for us to understand, but it’s all Greek.”

The party leader was not the only target.

Thanasis Koukakis, an investigative reporter who had broken news in 2019 aboutGreece’s major banks, noticed problems with his new iPhone in June 2020. He asked a source if it was possible he was under surveillance.

The source told him he was. He said he was shown transcripts of his conversations, including one as he waited for his daughter in front of her school, complete with notes describing garbled phrases.

He complained to the country’s communication and privacy watchdog. Before he could get an answer, the government amended a law in March 2021, allowing it to withhold information from people being investigated on questions of national security. The privacy watchdog told him that it had no information about his phone.

Later, an investigation by Reporters United, which included state intelligence documents and the prosecutor’s orders, showed that the state surveillance was ended the same day he filed his complaint.

It also turned out that Mr. Koukakis’ phone was infected with Predator, which he discovered only in March of this year, after Citizen Lab, the world’s foremost experts on spyware tested his device. The government denied having anything to do with it.

Only on Wednesday, did he finally receive a call from a prosecutor from the country’s highest court to set up an appointment about his complaint.

“The revelation of Androulakis’ case is a blessing for me,” said Mr. Koukakis, who is convinced Mr. Mitsotakis knew everything about the surveillance in the current scandal.

Mr. Androulakis, too, filed legal complaints and petitioned Greece’s watchdog to look into the breach of his privacy.

In his case, the watchdog agency was able to confirm with Mr. Androulakis’s telephone service provider in early August that the intelligence agency had tapped his phone.

Giorgos Gerapetritis, one of Mr. Mitsotakis’ closest aides, said he then tried to set up a meeting between Mr. Androulakis and the intelligence chief, so that the top spy could explain to him and him alone, as was permitted under the law, why he was under surveillance.

But he said he never heard back.

Instead, Mr. Androulakis says he wants the matter handled by the judiciary and aired before Parliament’s ethics committee and Greece’s privacy watchdog.

The whole affair has set off a political upheaval in Greece, with parliamentary elections approaching by next summer.

Mr. Georgiadis acknowledged that any evidence of Mr. Mitsotakis having known about the surveillance would be “very bad. But he didn’t know.” He put the blame on what he called the “political screw up” of the fired spy chief, but also warned that the scandal could open the door to an opposition more favorable to Russia.

But Mr. Androulakis, like many Greeks, is convinced the enemy is within.

“I never expected the Greek government to put me under surveillance,” he has said, “using the darkest practices.” 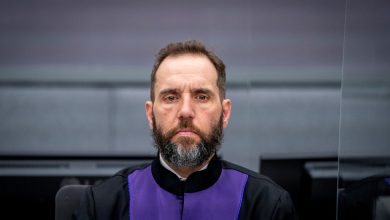 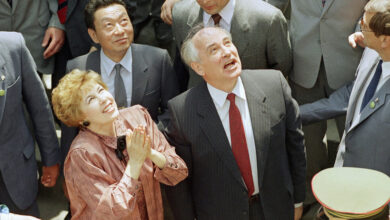 Why Gavin Newsom Rejected These 5 Bills 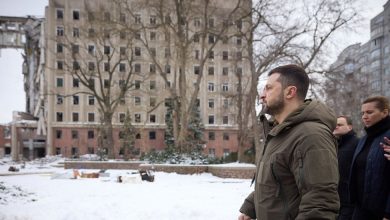 Ukraine Urges Allies to Speed Up Delivery of Weaponry