TENERIFE, Spain — Bethany Evans’s first experience watching Wales in the World Cup had many of the key components she had always envisaged. By her side were her friends and father, Mark, 59, with whom she has followed Wales over land and sea.

Around them, Wales fans were decked out in the country’s red jerseys and bucket hats and draped in dragon-crested flags, all of it underscoring the supporters’ nickname: The Red Wall.

And then there was alcohol — lots and lots of alcohol. Its absence has been a major subject of discussion since Qatar’s decision to ban beer sales in the tournament’s stadiums. But it was being served unabashedly here, as fans chanted, jumped and hollered their way through a pair of sunken bars off the corner of a street in Tenerife, in the Canary Islands.

“This has been really amazing to plan,” said Evans, 25, a health and safety manager from Pontypridd, in South Wales, whose summertime tweet suggesting a viewing party on this island blossomed into something more than she could ever have imagined.

While Evans’s original dream was to attend the World Cup in Qatar itself — Wales has qualified for the first time since 1958 — she said a combination of cost, circumstance, rules and moral questions ruled that out. Instead, she and thousands of fellow Welsh fans have opted to make this affordable party island some 4,000 miles away from Qatar their home for the tournament. 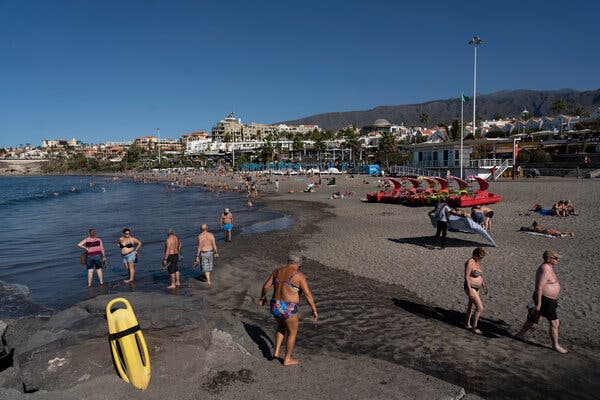 A joking tweet by Bethany Evans, top left, was the impetus for a migration of Wales fans to Tenerife. There they enjoyed sand and sun and, crucially, alcohol. Credit…Laura Leon for The New York Times

Fans have been arriving in Tenerife this week by the thousands, hoping for the kind of sun-kissed World Cup celebration they have always craved — on their terms, and on their budget.

“I’m just gutted that the first time we get to the World Cup, it’s not one for the working man,” said Lee Chamberlain, 50, a painter and decorator from Mold, North Wales. Chamberlain said a travel agent presented him with two options: three or four days with tight purse strings (and drinking rules) in Qatar, or 10 days at one of Tenerife’s nicer hotels, all inclusive. It was a no-brainer, he said.

That supporters from a tournament-starved nation like Wales have been deterred, en masse, from heading to Qatar speaks volumes about the motives of soccer’s powers that be, many Welsh fans said.

Other than the host nation, which gains automatic qualification, Wales has spent the longest time absent from the World Cup of any of this year’s competitors, last qualifying 64 years ago, when coverage was more difficult and traveling fans was practically nonexistent.

“It made me very proud to think I was there to see them,” said Les Thomas, 90, from Kerry, who was able to attend a game in at the World Cup in Sweden in 1958, when he was serving overseas with the British navy. Thomas said he saw only a tiny pocket of Welsh fans at the opposite end of the stadium that day.

Over the decades that followed, that tournament — and those who attended and played in it — gained mythical status in Wales, a hilly nation of about three million people. Generation after generation failed to qualify for the next major championship on the horizon, culminating in the low of 2011, when Wales had fallen to 117th in the world, behind nations like Guatemala, Guyana and Haiti.

Pubs and restaurants have put out the welcome mat for Wales’s so-called Red Army.

But as Wales continued to mine generations of talents from those depths, though, new stars like Gareth Bale and Aaron Ramsey emerged. They and their teammates reached the semifinals of the European Championship in 2016, and qualified again for next edition that was played last summer. All along, optimism about reaching Qatar was growing.

After Wales dispatched Ukraine in a World Cup playoff in June to seal its place, an ecstatic Evans began weighing her options.

“I wasn’t quite aware of some of the issues until they were brought to light,” she said of the concerns that have dogged Qatar’s preparations for the event. “I think I, and probably many others, are very ignorant to what goes on in other countries, because it’s not something that we really hear about until an event like this happens.”

Wales, like many competing nations, has been critical of Qatar’s hosting of the tournament. The team’s captain, Bale, had been expected to wear a rainbow-colored armband in support of the L.G.B.T.Q. community, only to opt out at the last minute after FIFA threatened to discipline anyone who did so. Welsh players have been given freedom to speak out on such issues, should they wish. And before the tournament, some staff members of the Football Association of Wales reportedly refused to travel to Qatar because of its laws against homosexuality.

For Evans, though, the biggest deterrent to a World Cup trip to the Gulf was cost, as she estimated a week in Qatar would set her back around £3,500 (roughly $4,100). She sent out a tongue-in-cheek tweet, saying that Qatar was too expensive and that she was looking for an alternative — “somewhere hot” — such as Tenerife, a trip she estimated to be around a quarter of the cost.

After a few fans declared they liked the idea, and it began to gain momentum, Evans was invited to discuss it in an appearance on a Welsh news broadcast. That led to a Facebook group that had more than 2,400 members as of this week. There, fans discussed their travel plans, shared drink deals they had negotiated with bars, and talked about the merits of Tenerife. When FIFA and Qatari organizers surprised fans on the eve of the tournament by announcing they would not sell beer at stadiums, they even joked that they had made the right choice in choosing Spain early.

Fans watching Wales play the United States in its opening game. An early American goal brought worry. A late one by Gareth Bale changed the mood.

“With football, I know it’s perhaps bad to say it, but you’ve got to have a drink, and you’ve got to have a good time as well,” said Tyrone Fowler, 28, a food delivery driver from Newport, South Wales, who was headed to Tenerife this week. “It’s about building the atmosphere.”

During Monday’s opener against the United States, Welsh fans in palm-lined Costa Adeje found touches of home in and around adjacent sister bars, The Original Wigan Pier and La Flaca, which at Evans’s request had agreed to host fans and put Wales games on its TVs.

Cocktails had been given Welsh names, and the Welsh flag covered many of the bar’s walls and the trees outside. In one corner, a catering company had brought in food, while extra beer had been ordered to accommodate more than 400 attendees who could fit into the two establishments. Beer, at a only couple of euros, was far cheaper than the reported $14 for a half liter in Qatar.

An estimated 3,000 Welsh fans are expected in Tenerife over the next week or so, filling bars and restaurants in Costa Adeje, nearby Playa de las Américas and other coastal towns dotted across the island.

On Monday night, when the final whistle blew on a 1-1 comeback draw with the United States, Wales fans, relieved, rose to their feet and sang their adopted anthem, “Yma o Hyd,” a folk song released by the nationalist singer Dafydd Iwan in the 1980s that translates to “Still Here.”

For Evans and those around her who later spilled out into the night, Tenerife may not have been Qatar, but it could have been anywhere, really, as long as it looked and felt this good.

“It is just a family event,” Evans said before the game, reflecting on how her simple suggestion had brought so many like-minded fans to this sunny island 1,700 miles from home. “You might not know them, but, in a way, you still do.”

Tags
Had Said That Wales Was

Exercise Was the Perfect Coping Mechanism, Until It Wasn’t 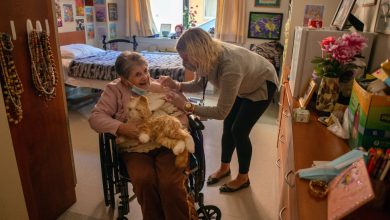 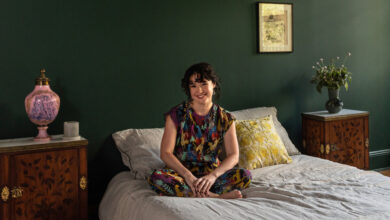 Sarah Steele, of ‘The Good Fight,’ on Finding Love in Brooklyn 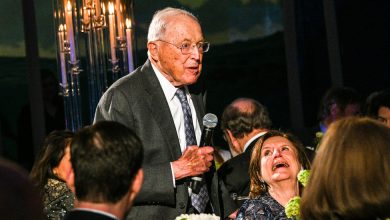