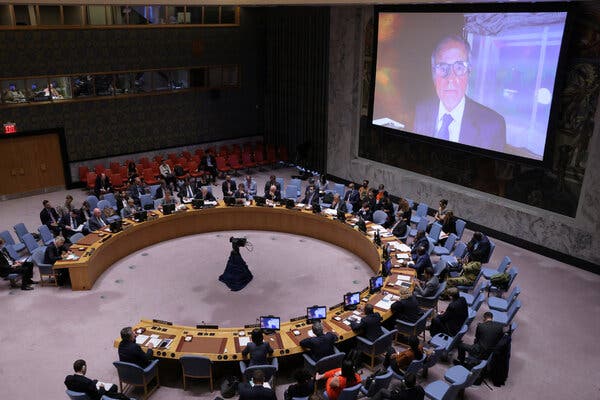 A briefing on the Zaporizhzhia power plant to the U.N. Security Council yesterday.Credit…Andrew Kelly/Reuters

The U.N. nuclear watchdog has called for a no-fire zone around the Zaporizhzhia nuclear complex after nuclear inspectors, who had to wend their way through the battlefield to get to the plant, said they were “gravely concerned” about conditions there.

The inspectors reported having found Russian military equipment parked inside buildings, as well as damage to buildings housing fresh nuclear fuel and radioactive waste. Plant operators, they said, were being denied access to some parts of the facility. The on-site emergency center has been compromised and is being used by Russian military personnel, the inspectors said.

But the agency has no real power to stop shelling near the plant, for which neither Russia nor Ukraine will take responsibility and which could result in a Chernobyl-like nuclear disaster. The nuclear agency has left two inspectors at the plant to monitor conditions, and it said it was prepared to start consultations with both sides over a security zone around the plant.

Quotable: “We are playing with fire, and something very, very catastrophic could take place,” Rafael Mariano Grossi, the U.N. official who led the inspectors, said.

Related: Russia’s purchase of millions of shells and rockets from North Korea is a sign that global sanctions have hampered the Russian military’s supply lines.

Dispatch: Months into the war, very little about day-to-day life seems to have changed in Moscow, our correspondent writes. The ruble is soaring, the opposition has been silenced and the media is almost completely under the Kremlin’s control.

European governments are taking trees from protected forests and using them as green energy.Credit…Andreea Campeanu for The New York Times

Europe is sacrificing its ancient forests for logging

When the E.U. began subsidizing wood burning over a decade ago, it was seen as a quick boost for renewable fuel. Chips and pellets were marketed as a way to turn sawdust waste into green power. But those subsidies have given rise to a booming market, to the point that wood is now Europe’s largest renewable energy source. The E.U. now consumes far more wood pellets than any other region.

As demand surges amid a Russian energy crunch, whole trees are being harvested for power. While European nations can count wood power toward their clean-energy targets, the E.U. scientific research agency said last year that burning wood released more carbon dioxide than would have been emitted had that energy come from fossil fuels.

The European Parliament will next week vote on a bill that would eliminate most of the subsidies and prohibit countries from burning whole trees to meet their clean energy targets. But with supplies of Russian oil and gas in jeopardy, some European governments are pushing hard to keep the subsidies in place.

A sprawling industry: E.U. official research could not identify the source of 120 million metric tons of wood used across the continent last year.

In her first public comments as Britain’s prime minister, Liz Truss promised to shield Britons from the crippling impact of rising energy costs and to implement a “bold plan” to revive the economy. “As strong as the storm may be, I know that the British people are stronger,” she said of the energy price shock, slowing growth and double-digit inflation.

With some experts warning that millions of Britons could face destitution from energy bills that could jump 80 percent in October, Truss is widely expected to authorize a massive state intervention in the energy markets. Those details, which could include capping energy prices at a cost to the government of $100 billion or more, will likely be announced this week.

Truss, Britain’s fourth prime minister in six years, will today answer questions from lawmakers, including the leader of the opposition Labour Party, Keir Starmer. Labour has recently consolidated a significant lead in opinion polls, though that may be at risk if Truss receives a significant surge in support as she takes power.

Cabinet: Truss’s new cabinet rewards supporters and passes over those who backed her opponent, Rishi Sunak, in the leadership contest. After a campaign distinguished by the ethnic and gender diversity of its candidates, Truss gave the three most prestigious cabinet posts to ministers who are not white.

Opinion: Britain’s next Prime Minister is still in thrall to the empire, writes Kojo Koram, the author of “Uncommon Wealth: Britain and the Aftermath of Empire.”

Beavers can be complicated neighbors. They’re wild, swimming rodents the size of basset hounds with an obsession for building dams. They will flood roads, fields and forests or fell trees without a second thought. When conflicts arise, and they probably will, you can’t talk it out.

Those troubles aside, beavers can provide a striking number of other benefits. And as global warming intensifies droughts, floods and wildfires, a growing number of ranchers, scientists and other “beaver believers” have come to see the creatures not only as helpers, but as furry weapons of climate resilience.

Antonio Conte’s painful relationship with the Champions League: The Tottenham managerhas never been past the Champions League quarterfinal, but there is more to his record than meets the eye. Whether the fiery Italian manager can lift the famous trophy remains to be seen. For now, this competition is associated with pain.

The bad boy of the Premier League is back: Diego Costa was one of English soccer’s great mavericks. At 33, the striker is past his prime, but he’s lost none of his famed edge, and his return with Wolves could be just what the team desperately needs.

World Cup news updates: Surgery for Paul Pogba could mean one of the world’s greatest midfielders could miss the tournament. Plus, the debate over Ivan Toney’s potential call-up to the England squad rages on.

The power of random acts of kindness

Warm words from a stranger. A free cup of coffee. An unexpected ride home. Random acts of kindness such as these can have a powerful effect on their recipient — one that may be underestimated by the perpetrator, according to research published last month.

“People tend to think that what they are giving is kind of little, maybe it’s relatively inconsequential,” said one of the study’s authors, Amit Kumar. “But recipients are less likely to think along those lines. They consider the gesture to be significantly more meaningful because they are also thinking about the fact that someone did something nice for them.”

There may be a social cost to underestimating those acts, he warned: “Not knowing one’s positive impact can stand in the way of people engaging in these sorts of acts of kindness in daily life.”

That kindness boosts well-being is hardly new. Studies have shown that voluntarily helping others can help lower people’s stress levels. Simple acts of connection, like texting a friend, mean more than many of us realize. But researchers who study kindness and friendship say they hope the findings strengthen the case for making these types of gestures more often.

Little is simpler or more glorious than steamed artichokes with butter.

Work your way through the six titles on the Booker Prize shortlist.

What to Listen to

In “Cool It Down,” The Yeah Yeah Yeahs dare to imagine a bold, fresh future.

P.S. The Times reporter Julian Barnes (“not the British author”) explains why it’s not easy sharing a name in journalism.

The latest episode of “The Daily” is on the U.S. midterm elections.

In the tug of war over Taiwan, chips play a decisive role.