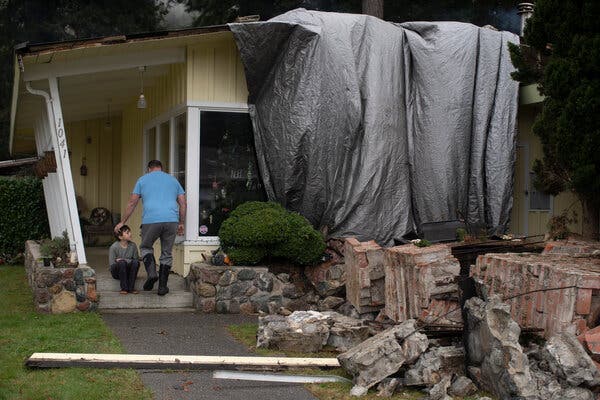 A home in Rio Dell, Calif. The earthquake struck southwest of Eureka shortly after 2:30 a.m. on Tuesday.Credit…Justin Maxon for The New York Times

California’s North Coast is renowned for its pristine, spectacular beauty. Less known is its vulnerability to earthquakes.

The most seismically active stretch of the state, scientists say, lies around Cape Mendocino in Humboldt County, where the westernmost tip of the Pacific coastline curves out into the ocean. There, under roiling blue waves, three tectonic plates meet, grinding and heaving. The Mendocino Triple Junction, as the configuration is known, generates an average of 80 earthquakes of magnitude 3.0 or greater each year.

On Tuesday, shortly after 2:30 a.m. Pacific time, that immense junction again shifted, jolting Humboldt County awake with a 6.4 magnitude temblor. The center was just offshore, about 12 miles west of Ferndale.

At least two deaths were attributed to the quake — two people, ages 72 and 83, suffered medical crises and died before emergency workers could reach them, according to William Honsal, the sheriff of Humboldt County. At least 12 other people were injured. Tens of thousands of utility customers lost power. Fernbridge, a bridge that serves as the most direct route between Ferndale and Highway 101, was closed, and officials estimated that as many as 150 people in Rio Dell, a city of about 3,300, would be displaced because their homes were rendered unsafe by the quake.

Darren Gallagher, left, inspected the damage to his home with his friend Kyle Chittenden in Rio Dell.Credit…Justin Maxon for The New York Times

Even where damage was minor, the quake zone was a mess of toppled Christmas trees, shattered storefronts and traumatized animals and children. Rachael Sovereign, 40, told me her 10-year-old son was asking to open his Christmas gifts early; the quake had toppled their chimney in Rio Dell, leaving Santa with nowhere to come in.

Some 250 miles to the south at the University of California, Berkeley Seismology Lab, however, the quake brought with it a bit of good news: California’s MyShake early warning earthquake app, a statewide alert that the lab helped develop, issued its largest heads-up since the state debuted it in 2019.

I spoke on Tuesday to Richard Allen, the lab’s director. Here’s some of our conversation, condensed and edited.

Talk to me about the North Coast and earthquakes.

When we think about earthquakes in California and where they occur, we think about well-defined faults — the San Andreas fault. The Hayward fault. Most of those places are where two tectonic plates join, and earthquakes happen when they collide.

But the Mendocino Triple Junction is different?

Three plates join at the Mendocino Triple Junction, and it creates a real mess of faults mashing and colliding. To the south of the junction is the San Andreas fault system, where the Pacific plate and the North American plate are moving past each other. And then to the north is the Juan de Fuca plate, which is subducting beneath the North American plate.

Right. It’s a much more complicated geometry of faults, along with more motion to be accommodated, and that leads to more events.

Is the area getting more active or less active?

People always ask that. It’s neither. We have a magnitude 6.5 earthquake in this region about once a decade.

What was your first thought when Tuesday’s quake hit?

I was excited because we sent out an alert to a huge number of people — it was a great success.

Of course, a lot of people were sound asleep at 2:30 in the morning.

Yes, there was lots of discussion of that on Twitter. But in big earthquakes, about half of injuries are because either people fall over or things fall on people. So if you have just a few seconds to drop, cover and hold on, we could potentially halve the injuries. A lot of people did get the warning and react. The alert reached about 270,000 people — those at the epicenter had just a few seconds of warning, but people in the Bay Area had up to 100 seconds. People were warned all the way to the south of the Bay Area, more than 400 kilometers from the earthquake.

Elon Musk asked his followers on Sunday night whether he should resign as head of Twitter after facing a backlash for unpopular new content moderation policies.Credit…Jim Watson/Agence France-Presse — Getty Images

If you read one story, make it this

Elon Musk said on Tuesday that he would resign as chief executive of Twitter, complying with a majority vote by his followers last weekend, but not until he finds “someone foolish enough to take the job.”

The rest of the news

Tell us about your favorite places to visit in California. Email your suggestions to CAtoday@nytimes.com. We’ll be sharing more in upcoming editions of the newsletter.

We’re writing about how Californians celebrate the holidays. Do you relax by the beach, visit Disneyland or make tamales with your family? Maybe you always travel to a special spot within the Golden State?

Email us at CAtoday@nytimes.comwith your California holiday traditions and memories. Please include your name and the city where you live.

We may include your email response in an upcoming newsletter or in print. By emailing us a response, you agree that you have read, understand and accept the Reader Submission Terms in relation to all of the content and other information you send to us (“Your Content”). If you do not accept these terms, do not submit any content.

And before you go, some good news

A California grade-school teacher won $1,000 this month — for being kind.

Earlier this year, a professor at U.C. Berkeley’s Haas School of Business started an initiative to recognize one person each month for their kindness and award them $1,000. The professor, Alan Ross, said he had wanted to honor a beloved, especially kind preschool instructor who taught his children and died from cancer.

The program’s first awardee was Michele Williams, a fourth-grade teacher at the Berkeley Arts Magnet School, KTVU reports. Williams was chosen for her dedication to her students, even after they had moved on to other grades. A parent said that Williams still reached out every month to check on her son with special needs, even though she taught him several years ago.

“There isn’t a teacher in this auditorium that doesn’t deserve an award like this,” Williams said during the ceremony. “Kindness really goes hand-in-hand with teaching. It’s just part of our job, a part of our calling, a part of our mission.”

Thanks for reading. We’ll be back tomorrow.

Soumya Karlamangla, Isabella Grullón Paz and Allison Honors contributed to California Today. You can reach the team at CAtoday@nytimes.com.

Tags
California People That Was With 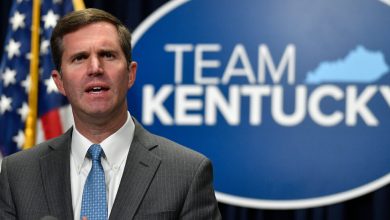 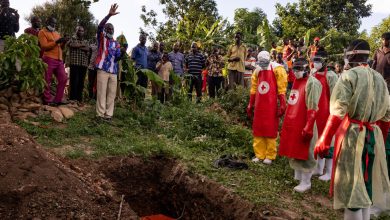 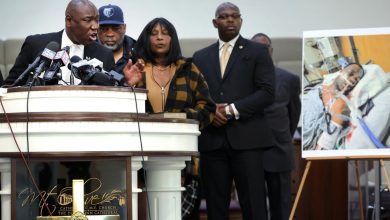 Memphis Officers Had Been Reprimanded After Using Force