We had an all-encompassing view of Rio de Janeiro and its surroundings: Sugarloaf Mountain, the Christ the Redeemer statue, Copacabana Beach. Architectural novelties like the Niterói Contemporary Art Museum and the Metropolitan Cathedral stood out among the sea of buildings, as trains and streetcars passed by, and thousands of dancers swayed and strutted during the city’s Carnival celebration.

Yet Rio was more than 6,000 miles away, while my husband, son and I stood in a building in the Speicherstadt, the historic warehouse district in Hamburg, Germany.

The scene we admired is one of more than a dozen sprawling exhibits at Miniatur Wunderland, home to the world’s largest model railway and largest miniature airport. The meticulous replica of Rio came on line as Wunderland’s newest exhibit in December 2021, constructed over four years in partnership with a family-owned model-making company out of Argentina.

“Mind-blowing,” my husband said several times during our five hours of marveling at reproductions of Germany, Italy, Scandinavia, the United States and other sites, complete with tiny hand-painted figures participating in the myriad activities of daily life. Through all of the landscapes, trains continually chugged along a total of 16,138 meters (almost 53,000 feet) of track. 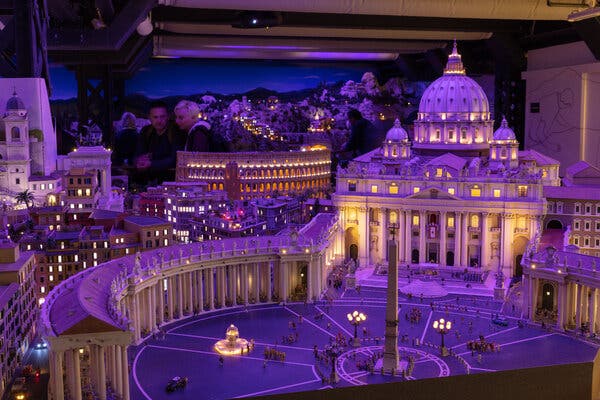 In the model of St. Peter’s Square in Vatican City, the statues of saints on the colonnades wear clothing made of paper napkins from the Wunderland bistro.Credit…Andreas Meichsner for The New York Times

The project started in 2000 when the twin brothers Frederik and Gerrit Braun, then 32, dreamed of creating the largest model railroad in the world. The siblings, who grew up as train buffs, wound up running a Hamburg nightclub and record label in the 1990s, but eventually they wanted a lifestyle change. With help from friends and family, the Brauns opened Miniatur Wunderland’s life-size doors in 2001.

In the 21 years since, the attraction has drawn more than 21 million visitors from around the world, becoming one of Germany’s top tourist draws. Yet in the United States, Miniatur Wunderland is primarily known among railroad buffs and other hobbyists.

Count us lucky to have a son, now 15, who has been obsessed with planes, trains, cars and anything else that moves mechanically since he was old enough to point. Lucky because I hadn’t known about Miniatur Wunderland, despite having made numerous trips to Germany, as the daughter of two German-born parents. My son, on the other hand, had been talking about Wunderland for years, ever since he discovered some YouTube videos of it. He was particularly interested in the working airport, which averages 500 takeoffs and landings a day, displayed on a flight monitor (the difference: these model planes are always on time).

So when we planned a trip back to Germany in August to see family in Munich, we added a detour to Hamburg to visit Miniatur Wunderland (and bought tickets online a month in advance for the timed entry). My husband and I wanted to indulge our son, an only child, but what we didn’t anticipate was our own enchantment with this tiny world, full of painstaking detail and technological wizardry, sure, but also bursting with whimsy and humor.

Take the diorama of Italy, for instance. Among the faithful reproductions of St. Peter’s Basilica, the Colosseum and Mount Vesuvius (complete with regular eruptions), there are little moving vignettes, activated by pressing a button (200 such buttons exist throughout Wunderland). In one, Pinocchio’s nose grows six inches across the room of a tiny cottage. Elsewhere, a small Michelangelo bounces on a trampoline to reach the Sistine Chapel ceiling with his paintbrush. Creative license? Absolutely.

“That was the model builder saying, ‘I could have put Michelangelo on scaffolding, but nobody would see it. What could I use instead to show him painting?’” said Thomas Cerny, a software developer and spokesman for Miniatur Wunderland, in a recent phone interview. “The model builders are what make the whole exhibition special. If you know them, you can even tell who built what, as each one has their own sense of humor,” Mr. Cerny added, while sharing with a chuckle that the 100 or so statues of saints on the colonnades in St. Peter’s Square wear clothing made of paper napkins from the Wunderland bistro.

As we moved from exhibit to exhibit, directing each other this way and that to point out some new captivating feature, we appreciated that the landscapes were anything but static. In addition to the trains, cars and boats that travel about (in the Scandinavia section, ships navigate tides in real water), most of the almost inch-high figures are doing something, animated in their depiction if not through actual movement. “As time went on, the model railway became less important, and the storytelling and the creativity became much more important,” Mr. Cerny said.

On the fourth floor, we passed by the central command for all of the exhibits, filled with large screens and electronics. It was like an open kitchen. Not only do the systems that control the trains, vehicles and lighting originate here, but video cameras let staffers monitor things like train derailments and other glitches that can occur with so many moving parts.

We discovered that it’s not always sunny in Miniatur Wunderland, either. Every 12 minutes, the exhibits shift from day to a three-minute-long night, and the real rooms darken as almost half a million LED lights twinkle within the dioramas. Each of those lights is programmed to turn on in sequence rather than all at once, creating a condensed simulation of nightfall. “The brothers are perfectionists,” Mr. Cerny said of the founders.

Indeed, as our son took close-up photos and videos of his favorite scenes, he commented that it would be hard to tell the difference between the real world and his iPhone images of this faithfully rendered diminutive one.

The most popular attraction is Knuffingen Airport, based on Hamburg’s own. It took almost six years to build and up to now has been Wunderland’s engineering masterpiece. Forty-five different aircraft taxi down runways and park at gates, propelled by individual battery-operated motors and steered by magnets and wires embedded in the road. The tricky part was devising a way for planes to take off and land on their own, Mr. Cerny said. Trial and error led to a moving belt under the runway; two thin metal rods extend from it to accelerate and lift each plane for takeoff (the reverse happens during landing).

Though we had spent way too much time in the real airport on our journey to Hamburg, with a five-hour unplanned layover en route, we happily stayed for close to an hour at the miniature Knuffingen, taking in the countless little scenes that unfolded: emergency vehicles responding to a fire, catering trucks servicing planes, jetways coming out from gates. When special aircraft like a “Star Wars” Millennium Falcon, Concorde or Airbus Beluga taxied out for takeoff, a murmur rippled through the crowd of visitors who stood around the runway, phones in hand.

The airport’s technology is about to be eclipsed, however, by a new feature that’s been even more challenging to enact: a Formula 1 racecourse within the upcoming Monaco and Provence exhibit. After four years ago of experimentation, the Wunderland team found a way to program the small cars to run actual, randomized races. A tiny magnetic field around each one powers and controls the cars. “Many said it couldn’t be done,” Mr. Cerny said. In early November, two cars successfully finished a race, followed by one among three cars the next week. The goal is to get some 20 cars racing at once, and the exhibit will then open, likely sometime next year.

Other new attractions are in the works, too, and they will go in a new wing of Miniatur Wunderland that opened in tandem with the Rio exhibit. The expansion had been in the works for 10 years and added more than 32,000 feet of exhibit space. Up next are Patagonia and Antarctica in early 2023, the South American rainforest in 2024 and parts of Central America and the Caribbean in 2025. Eventually, areas of Asia and Africa will be added to the Wunderland universe.

A glass-enclosed walkway connects the original building with the expanded space, spanning one of the canals that runs through the Speicherstadt, which is a UNESCO World Heritage Site. The walkway itself houses an exhibit, “The World From Above,” and, of course, trains run across it, too. Also new are two virtual reality experiences that put visitors within the Miniatur Wunderland landscapes.

When we arrived in Munich the next day, the three of us filled in my cousin about the visit. “Yes, I know of these two guys — the biggest nerds,” she said, laughing, when we mentioned Wunderland’s founders. As we recounted the details, it was hard to tell who’d come away more impressed: the kid who had been enchanted by videos all those years ago, or his parents, who never thought they’d be so captivated by a model world.

Tags
From Model New York Times That With 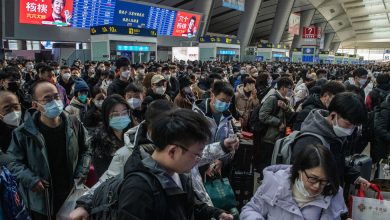 China Cautiously Takes to the Road for Lunar New Year 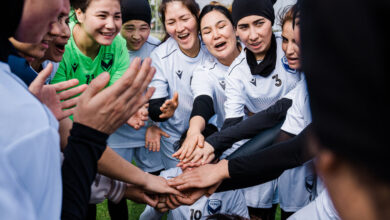 Behind the Scenes of an Afghan (Australian) Soccer Story 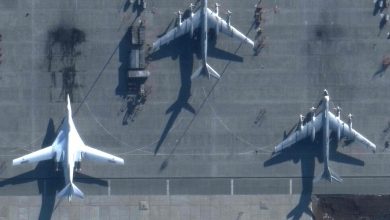