This is how the Russian army left the town of Balakliya in northeastern Ukraine, in a sign of a frantic, chaotic withdrawal as the Ukrainian Army closed in during a fast-moving counteroffensive over the last few days. The lightning assaults allowed Ukraine’s military to recapture hundreds of square miles of territory, strategic towns and abandoned weapons.

One resident, Oleksandr Kryvosheya, said that he had overheard Russian soldiers yelling at their commanders on a radio in an armored personnel carrier parked in the courtyard of his apartment block. “You left us behind, you got out,” the soldiers protested, Mr. Kryvosheya said.

“If they came to fight, if they came to build this new Russia, why didn’t they stay and fight in Balakliya?” he said in an interview on Tuesday.

As the Russian defenses around the town collapsed, residents said, soldiers ran for whatever transport they could, leaving behind ammunition and weapons along with personal items in apartments where they had quartered.

Ammunition boxes in the driveway of a police station used as a base by Russian forces in Balakliya.Credit…Nicole Tung for The New York Times

“Trucks drove through the city honking, and they climbed on and left,” said Igor Levchenko, a retiree, describing the Russian Army’s withdrawal after more than six months of occupation. “They didn’t have a fighting spirit. They were afraid.”

The testimony of the town’s residents aligned with reports from other recently retaken villages in the Kharkiv region, where Ukraine has routed Russian forces, and towns that are still occupied in the south. The accounts shed a harsh light on apparent morale and communications breakdowns within Russian occupying forces that could have broad implications for the course of the war, should units elsewhere be afflicted with similar problems.

Some witnesses described the Russian troops as increasingly ill-disciplined, unpredictable, anxious and, in some cases, simply scared.

The morale of Russian troops is just one factor in Ukraine’s calculus about whether it can extend its gains in two campaigns, in the east and the south, without overstretching its own forces. But it could prove critical, as it did over the last week, when Russian forces deserted their positions and gear en masse and Ukrainian forces swept into dozens of villages and towns.

Around 150,000 people in some 300 communities in northeastern Ukraine are living in areas reclaimed from Russian control, Hanna Malyar, Ukraine’s deputy minister of defense, said Tuesday.

Even after the lightning offensive, Russia still holds vast swaths of territory in eastern and southern Ukraine and outguns the Ukrainians with artillery and tanks. Russian troops have increased shelling in some areas, including on the Ukrainian stronghold of Bakhmut, in the east, where both sides are deeply dug in. And the particular woes of units in the north may reflect a Ukrainian strategy of striking first where the Russians were weakest.

A Ukrainian soldier waving to passing buses near Verbivka, another retaken town in northeastern Ukraine, on Tuesday.Credit…Nicole Tung for The New York Times

In an interview on Tuesday, Ms. Malyar said that the Ukrainian Army was prepared to react “dynamically” to various situations, suggesting that its plans are not relying wholly on collapsing Russian morale.

“The Ukrainian Army is more motivated because we are fighting a just war, we are fighting for our land,” she said. “When Russian soldiers arrive here they realize they have been deceived by Russian propaganda.”

Still, a visit by journalists to the recaptured areas, organized by the Ukrainian police, turned up signs of what military analysts have said are worsening shortages of qualified troops in Russia’s military, which has increasingly relied on a motley array of soldiers.

In the newly recaptured village of Verbivka, made up of a few isolated streets and brick homes surrounded by a sea of farm fields, a crowd of residents turned up to meet the police buses. Some cried, expressing both happiness and shock at the quick turn in fortunes.

A hundred or so soldiers had occupied the village from the self-declared Luhansk People’s Republic, one of the two Russia-backed separatist groups that rebelled in 2014, residents said.

Women walking past a checkpoint Tuesday that had been erected by Russian soldiers in Verbivka.Credit…Nicole Tung for The New York Times

Put on occupation duty in what had been a rear area for the Russians, the troops were ill-equipped, lacking even their own vehicles. They had been dropped off by buses, residents said.

Iryna Derevyanka, a schoolteacher, said one soldier had told her he was only fighting “to earn money.” The occupiers made little effort to sway residents with the ideology of expanding Russia’s borders, she said.

The soldiers quartered in homes of residents who had fled, typically about half a dozen men to a house, and drove in cars commandeered from locals. “They lived comfortably, taking whatever they wanted,” she said.

Confronted with an unexpected fight as the Ukrainian Army advanced, the soldiers seemed surprised, she said, as they had made no special preparations either for defense or retreat. In the panicky moments as they fled, some changed into looted civilian clothes.

Vitaly Bychok, a welder, said he had seen Russian military jackets hanging on a fence after soldiers changed into street clothes, in an effort to slip away disguised as fleeing civilians.

“They ran into the houses and changed into whatever clothes they could find,” he said. “They ran where they could, in small groups.”

The counterattack on the village was not without cost for the residents. About two dozen civilians were wounded by shrapnel from Ukrainian shelling, said Larisa Khrantsova, a clerk in the village store. “I heard people screaming in the streets,” she said.

But she said she understood the risks the Ukrainians had undertaken in the attack.

“How else could we get them out?” she said.

A school that had been used by Russian forces in Verbivka was destroyed by Ukrainian forces during their offensive to recapture the village.Credit…Nicole Tung for The New York Times

In the hours after the battle, the village was eerily silent.

“When they left it became quiet, and it was so scary I cannot describe it,” said Olha, an employee of an electrical company who asked that her last name not be published out of safety concerns. “We were scared that this silence would bring something horrible.”

The Russian soldiers, she said, were young and inexperienced. “They were silly, so young, children,” she said. “If they had surrendered, they would have survived.”

The soldiers’ lack of discipline extended to their treatment of civilians, residents said. If men expressed any displeasure with the Russian military’s presence, soldiers would hit them in the chest with a rifle butt, said Oleksandr, a retiree. “Many men had blue chests,” he said.

In the south, people who just escaped Russian controlled territory said some of the occupying troops seemed scared about the possibility of fighting off a Ukrainian advance.

Graffiti by Russian soldiers on a bridge in Balakliya on Tuesday.Credit…Nicole Tung for The New York Times

“At the checkpoints, they seemed stressed out,” said Maksym Bratienkov, a beekeeper who fled a southern city, Berdyansk, for the Ukrainian-held city of Zaporizhzhia. “All night they were moving military equipment around, like they were in a hurry. They were looking for partisans and going to parts of town they had never been to.”

Another resident who fled southern-occupied territory, Yevhen Kornienko, said Russian troops had been barging into homes more often recently. “Even the simplest check can now end very badly,” he said.

Mr. Kornienko, speaking in a shelter for displaced people in Zaporizhzhia, said Russian forces in his hometown, Hola Prystan, had grown increasingly brutal. He also said that in the past few days, Russian soldiers were looting more than ever, robbing townspeople at gunpoint of electronic equipment, cars, computers, even dresses.

“They are out of control,” he said.

Mr. Bratienkov, the beekeeper, said not all the Russian soldiers in his town had behaved badly. Some were from the mostly Muslim republic of Dagestan, he said, while others came from a Ukrainian separatist group, and were to be feared. “These guys are fanatics,” he said.

In Balakliya, the police on Tuesday exhumed two bodies of men they said had been shot in the final, panicky days before the Russian withdrawal. Working in a thick stench, officers zipped the corpses into body bags and loaded them into a hearse taking them for an autopsy. In the town and nearby areas, Ukrainian prosecutors say they have found a dozen or so bodies so far.

Police officers and war crimes investigators exhumed the bodies of two civilians killed in Balakliya on Tuesday.Credit…Nicole Tung for The New York Times

As elsewhere, Russian soldiers had taken to living in abandoned apartments.

Tatyana Morkolenko, another retiree, lived next door to a dozen or so Russian soldiers who had settled into three apartments in her building. They were quiet neighbors, she said, but didn’t appear disciplined. When she entered one apartment after they fled, she found empty beer bottles in the kitchen.

In their haste, Russian soldiers left a city police station in a state of chaos, with papers scattered about the floor along with personal items, like a mug and boots. A can of ham was set out on a table, a meal never enjoyed.

The floor was littered with papers trodden over with muddy boots, including letters and drawings sent from Russian schoolchildren to cheer up the soldiers.

Upstairs, laundry was drying on a clothesline and looped over chairs, including a pair of gray, striped boxer shorts.

“Look,” said Oleg Tertishin, a Ukrainian policeman who referred to the Russian soldiers by a derisive term commonly used in Ukraine. “There are the underwear of the orcs.”

Some clothing and personal items left behind by Russian forces to dry in an auditorium at a police station in Balakliya, Ukraine.Credit…Nicole Tung for The New York Times 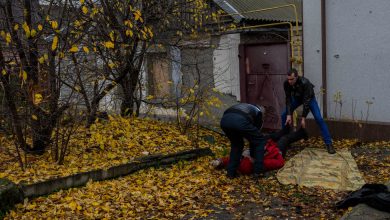 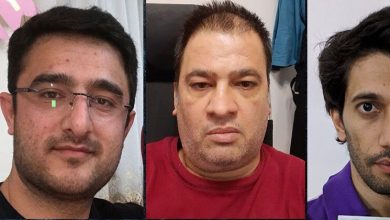 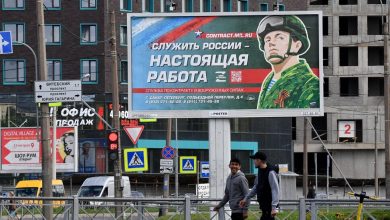 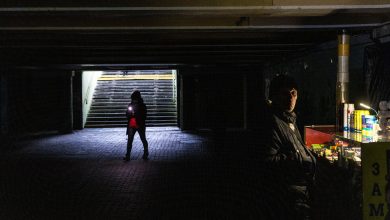