Most of the bartering involves items captured from Russian troops, which are exchanged for urgently needed supplies. “Let’s just call it a simplification of bureaucracy,” one soldier said.

By Thomas Gibbons-Neff and Natalia Yermak

DONETSK REGION, Ukraine — The Ukrainian sergeant slid the captured Russian rocket launcher into the center of a small room. He was pleased. The weapon was practically brand-new. It had been built in 2020, and its thermobaric warhead was deadly against troops and armored vehicles.

But the sergeant, nicknamed Zmei, had no plans to fire it at advancing Russian soldiers or at a tank trying to burst through his unit’s front line in eastern Ukraine.

Instead, he was going to use it as a bargaining chip.

Within the 93rd Mechanized Brigade, Zmei was not just a lowly sergeant. He was the brigade’s point man for a wartime bartering system among Ukrainian forces. Prevalent along the front line, the exchange operates like a kind of shadow economy, soldiers say, in which units acquire weapons or equipment and trade them for supplies they need urgently.

Most of the bartering involves items captured from Russian troops. Ukrainian soldiers refer to them as “trophies.”

“Usually, the trades are done really fast,” Zmei said last week during an interview in Ukraine’s mineral-rich Donbas region, where the 93rd is now stationed. “Let’s just call it a simplification of bureaucracy.”

Despite the influx of Western weapons and equipment in recent months, the Ukrainian military still relies heavily on arms and vehicles captured from their better-equipped Russian foe for the matériel needed to wage war; much of Ukraine’s aging Soviet-era arsenal is either destroyed, worn down or lacks ammunition. 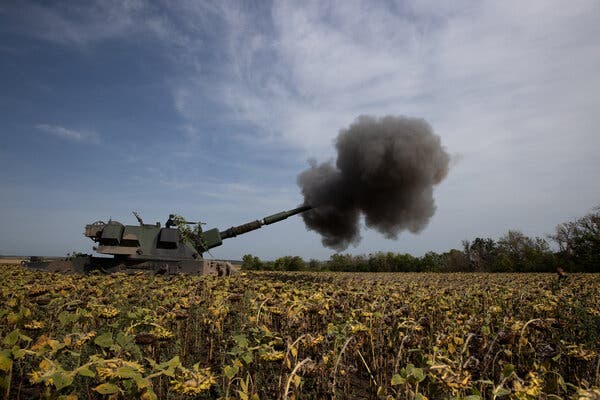 Ukrainian forces firing a howitzer toward a Russian position in Donetsk this month. Items captured from Russian forces are known as “trophies.”

Ukrainian soldiers said that a sort of “black market” system operated along the front. Items captured from Russian forces are known as “trophies.”

That has left Ukrainian soldiers scrounging the battlefield for essentials as their own supply lines are strained. And the relatively small numbers of big-ticket foreign weapons, such as the American-made M777 howitzer, are thinly spread very thinly on the sprawling 1,500-mile front.

“We have hopes for Kyiv,” said Fedir, one of the brigade’s supply sergeants and an understudy of Zmei, referring to military commanders in the capital. “But we rely on ourselves. We aren’t trying to just sit and wait like idiots until Kyiv sends us something.”

To protect against reprisals, Zmei, Fedir and others interviewed for this article requested that only their given names or nicknames be used.

The Ukrainian military did not immediately respond to a request for comment about the equipment exchanges.

Capturing Russian items has become increasingly difficult as the war moves into a more static phase, with Russia’s grinding artillery war forcing Ukrainians to slowly retreat in the east, while trying to regain territory in the south. That has created even higher demand for items traded in the soldiers’ underground exchange.

Such was the case in early May, when the 93rd — a renowned unit that had fought in almost every major battle of the war — was operating around the Russian-occupied city of Izium. Zmei, who before the war owned a small publishing house that specialized in dark fantasy novels, received an innocuous text message from a nearby Ukrainian commander.

“And we’d exchange it for something nice,” the commander added.

The series of text messages, sent over the messaging application Telegram and reviewed by The New York Times, is just one example of the type of equipment that is unofficially swapping hands.

The commander’s requests were modest: a transport truck and a couple of sniper rifles in return for the Russian trophy tank. But Zmei told his customer, “This is too few things for a tank, write down what else you need.” The commander responded that he had plenty of tanks and wanted only the items requested.

Servicing a captured Russian armored personnel carrier. Seizing Russian equipment has become increasingly difficult as the war has been in a largely static phase.
A captured Russian antiaircraft gun, camouflaged by greenery, in the Donetsk region. The grinding artillery war has created even higher demand for items traded in the soldiers’ underground exchange.

When the commander mentioned all the tanks in his unit’s possession, Zmei sensed an opportunity to expand the trade. He wanted more tanks, and noted that the 93rd had foreign-supplied anti-tank missiles and U.S. portable surface-to-air missile systems available for a swap.

“Can get the launchers for a Stinger, NLAWs, various large stuff for a trade — and a lot of that,” Zmei said, referring to some of the Western weapons, which cost tens of thousands of dollars apiece.

Of the more than half-dozen soldiers interviewed for this article, most said that this underground economy was driven by the need to survive. Sometimes, they said, that meant circumventing a clumsy bureaucracy.

Although soldiers said that they were supposed to send captured equipment up the supply chain back to Kyiv, they noted that there was little effort to investigate the underground exchanges, let alone punish anyone for doing it.

Western governments, having provided billions of dollars of military equipment, have pressed Ukraine to safeguard against possible corruption in the distribution process, but so far there have been no documented cases of weapons ending up in the hands of anyone apart from other Ukrainian units.

But even keeping the transfer of weapons unofficial can cause problems.

Matt Schroeder, an analyst at the Small Arms Survey, a research organization, said that informal transfers of matériel between units “could undermine stockpile management procedures,” but that “such transfers are not, in themselves, indicative of trafficking or leakage.”

Sitting near the turret of a captured Russian T-80 tank, a Ukrainian soldier named Alex explained that sending captured equipment back to Kyiv for official accounting was problematic.

“There is no guarantee that we’re going to get it back anytime soon,” he said. “We try to do it mostly ourselves.”

Inside a truck mounted with a captured Russian antiaircraft gun. Most Ukrainian soldiers said that the underground economy was driven by the need to survive.
Ukrainian soldiers with a camouflaged howitzer. Western governments have pressed Kyiv to safeguard against possible corruption in the process of distributing weapons.

A former software engineer from Ukraine’s second-largest city, Kharkiv, Alex is a celebrity in the 93rd. His captured tank, nicknamed Bunny, with him in command, destroyed several Russian armored vehicles around Izium and the northeastern city of Sumy earlier in the war, Ukrainian commanders said.

But now the tank is far from the front and awaiting a turret repair. An important part for that work was recently acquired by trading a 120-millimeter mortar and a heavy machine gun with another unit, Alex said.

Just as he was speaking, a captured Russian armored personnel carrier rolled into the repair bay. It parked behind a barely running Ukrainian armored vehicle that one soldier joked had probably participated in the Soviet invasion of Afghanistan in the 1980s.

Alex is waiting for his own kind of repairs. He was shot in the right leg during a patrol in May. The bullet shattered his femur.

He and several other Ukrainian soldiers had been on a reconnaissance patrol in the gray zone — the area between Russian and Ukrainian front lines — when he was hit. The mission had carried two objectives, he said: to find Russian positions and to find abandoned equipment.

“We are losing tanks,” Alex said. “If this war goes the distance, sooner or later we’ll be out of Soviet equipment and other Soviet tanks, so we will have to switch to something else.”

Near his subterranean headquarters not far from the front line, Alex’s battalion commander, Bogdan, described the severity of his unit’s situation. The sound of incoming and outgoing artillery echoed in the fields beyond.

“We’re fighting with whatever we captured from the enemy,” Bogdan said, noting that 80 percent of his current supplies was captured Russian equipment.

“It’s no better in other battalions,” he added.

Bogdan’s unit of around 700 troops had arrived to replace Ukrainian forces worn down by casualties and equipment loss. Now, after six months of acting like a “firefighter” by rushing from one frontline hot spot to the next, his troops were facing a similar fate.

“We are losing a lot of men,” Bogdan said. “We can’t cope with their artillery. This, and airstrikes, are big problems.”

Michael, a Ukrainian soldier in Donetsk, acts as a supply officer. He keeps a list of equipment his battalion needs, such as encrypted radios, semiautomatic grenade launchers and Polish 155-millimeter howitzers, called Krabs.
Alex, a former software engineer, with his captured tank, nicknamed Bunny. He said that sending equipment back to Kyiv was problematic: “There is no guarantee that we’re going to get it back anytime soon.”

Asked about sophisticated, Western-supplied weapons that government officials say will be the big difference-maker, he said that in his brigade, “nobody has foreign equipment,” adding, “We have a great many questions as to where it goes.”

Those questions have fallen on a 28-year-old Ukrainian soldier who goes by the name of Michael. He lives in a small rundown single-story house several miles from the front line. An infantry soldier by trade, he is currently Bogdan’s supply officer.

A Krab unit commander named Andriy said that his howitzers were not available for trade, though he might consider a swap if offered a French self-propelled artillery piece in exchange.

The 93rd currently only possesses old Soviet-era artillery pieces that have worn out barrels and are low on ammunition.

“I have to go and buy everything and trade things, and bring it all here,” Michael said.

“So what’s going on is a personal initiative,” he said. “You’re taking the risk, it’s criminal. Nobody will thank you. It’s a thankless job.” 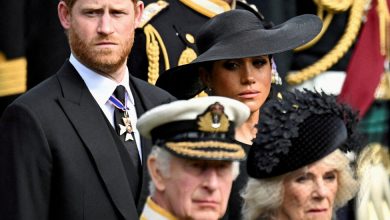 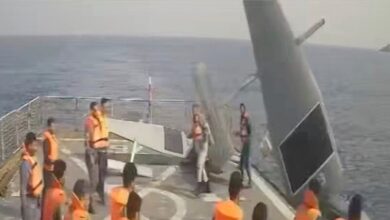 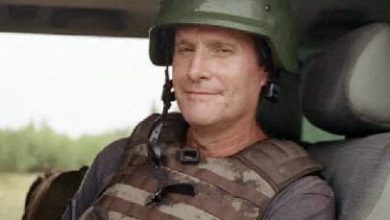 Two British men went to Soledar. Neither came back. 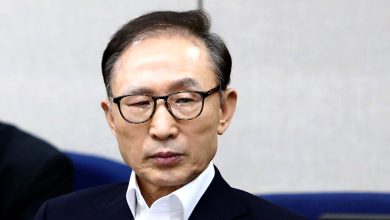