Muhammad Imtiaz Hussain is afraid to step outside his home in Albuquerque to water his plants. Or retrieve books from his car. Or even venture out onto his balcony.

“My kids won’t let me go outside of my apartment,” said Mr. Hussain, 41, whose younger brother Muhammad Afzaal Hussain, 27, was fatally shot a week ago Monday just a few blocks away. He was one of four Muslim men who were killed recently in the city — three in the past two weeks — and authorities believe the deaths are connected and meant to target the Muslim community.

The latest victim, a Muslim man in his mid-20s from South Asia whose name has not been released by the police, was killed on Friday just before midnight. Another man, Aftab Hussein, 41, was fatally shot on July 26. Authorities say that the killings of all three might be connected to the November 2021 killing of Mohammad Ahmadi, 62, outside a business he and his brother ran.

As the Albuquerque Police, the F.B.I. and the State Police appealed to the public for help in finding the killer or killers — on Sunday authorities described a vehicle of interest, a dark-colored, four-door Volkswagen sedan — the attacks have left Muslims in a state of terror.

One member who attended the Islamic Center of New Mexico, the same mosque as all four of the victims, said that he may never return, citing a fear of becoming “bait.”

Other members have temporarily left the state to stay with family members in other parts of the country to wait out the investigation. One man, who immigrated from Iraq, said that he felt safer back when he first came to the country in the 1980s. Another member, Salem Ansari, said that some who attend the mosque and work night shifts have quit their jobs.

“This situation is getting so much worse,” Mr. Ansari said.

Ahmad Assed, president of the mosque, said that he grew up in Albuquerque attending the Islamic Center but never felt isolated as a Muslim in the city. But now, he said, the community is going through a “sort of managed panic.”

The elder Mr. Hussain said that he had lived safely in his neighborhood for eight years since moving to the United States with his wife and children. His brother Muhammad arrived in 2017, and both men would go to the library at midnight or buy coffees late into the evening while attending the University of New Mexico as international students.

Police officers in Albuquerque gathering on Sunday where a Muslim man was killed on Friday night. Credit…Adria Malcolm for The New York Times
Altaf Hussain crying over the grave of Aftab Hussein, his brother, on Friday. Credit…Chancey Bush/The Albuquerque Journal, via Associated Press

“Now, I look outside the window and think, ‘Oh, this is the place where my brother was killed. Should we move?’” he said.

Mr. Hussain said that he had initially hoped to send his brother’s body back to be buried with family in Pakistan, but the numerous gunshot wounds had made his brother unrecognizable, and Mr. Hussain did not want his family to see him. The killer “wanted to finish him — the whole nine yards,” he said.

In general, anti-Muslim hate crimes in the United States have been trending downward. Brian Levin, a professor of criminal justice at California State University at San Bernardino and the director of the school’s Center for the Study of Hate and Extremism, said that the number of hate crimes reported against Muslims was lower in 2020 than in any year since 9/11, though he added that those numbers may be skewed because of pandemic restrictions.

But he said that hate crimes remain a concern: They rose more than 20 percent in 2021 and increased another 4.7 percent in the first half of 2022, the center reported. Also, “underlying anti-Muslim attitudes” are pervasive and resurface during times of national hardship, according to Professor Levin’s studies.

The authorities said that they are refraining from using the term “hate” in labeling the crimes until a motive could be established.

Just last year, the Islamic Center faced an attempted arson from a woman who the police say set three fires on the mosque playground and one fire at the mosque’s main entry. No one was injured, and the woman was arrested and charged with arson. The case is pending.

The Islamic Center has instructed its nearly 2,500 members to stay home as much as they can, use the “buddy system” when going out and refrain from “engaging with or agitating” anyone, Mr. Assed said.

He added that he still felt supported by other communities but that this time he also was feeling a sense of “hopelessness and despair.”

“I do watch my back and get in the car. I’m watching all my surroundings,” he said. “You don’t know whether they’re following you from the mosque, if they’re actually watching people going in and out of the mosque and following them elsewhere. The pattern is unknown.”

Some community members have expressed frustration about the lack of details from the police investigation, but Mr. Assed said he was in contact with authorities and understood why they have kept any developments under wraps. Authorities have neither elaborated on why they believe the killings are linked nor indicated whether there were any witnesses.

Mr. Hussain said that he wanted the federal and state governments to pour as many resources as possible into catching the killer.

But until someone is caught, nothing is likely to lessen his fear — or his grief. 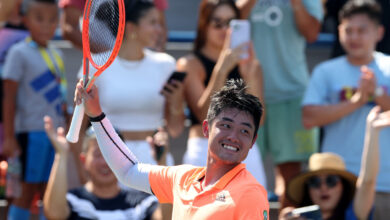 His U.S. Open Run Could Influence Tennis in China

At the U.S. Open, Serena Williams Was a ‘Game Changer’