Republicans running statewide in a Democrat-dominated state like New York often follow a predictable path toward the political center. On Sunday, though, Representative Lee Zeldin will take a different route — south to the Jersey Shore for a fund-raiser starring former President Donald J. Trump.

The high-profile rendezvous, at the palatial seaside retreat of old Trump real estate friends, has already prompted days of Democratic attacks against Mr. Zeldin, the Republican nominee for governor.

But Mr. Zeldin is after something more important to his campaign than political optics: With tickets going for up to $100,000 a couple (including a photo and “V.I.P. Reception” with the 45th president), the event promises to deliver $1 million or more in badly needed campaign funds, which would be his largest haul to date.

Republicans have lauded Mr. Zeldin, a 42-year-old Army reservist and conservative Long Island congressman, as their best chance to win the governor’s mansion in two decades. He faces a relatively untested Democratic opponent, Gov. Kathy Hochul, in a year when his party’s relentless focus on inflation and public safety may resonate with voters.

Yet with just nine weeks to go until Election Day, Mr. Zeldin is at risk of being dangerously outspent by Ms. Hochul, a critical impediment to meaningfully compete in the nation’s most expensive media market.

As summer wanes, that possibility has sent Mr. Zeldin on a furious fund-raising swing from the Hamptons to Lake Erie (one event featured a jet suit demonstration) hunting for cash.

And at a time when some party strategists are calling on him to moderate his stances on issues like guns or abortion, it has driven the congressman to tighten his links to right-wing heroes like Mr. Trump and Gov. Ron DeSantis of Florida, who have the notoriety to bring out big new donors, but nonetheless could turn off New York swing voters.

“My view is there’s a path, but that path is expensive,” said Gerard Kassar, the chairman of the Conservative Party in New York.

Not even Mr. Zeldin’s closest allies argue he will be able to match Ms. Hochul’s campaign juggernaut, which is on track to leverage her powers as governor to raise between $50 million and $70 million in the race and to begin blanketing the airwaves starting next week with an initial $2 million TV and digital ad buy targeting Mr. Zeldin.

But to compete, they say he needs to raise at least another $10 million to $20 million, multiples more than recent Republican candidates for governor, after a costly primary burned up almost all his funds, and left him with just over $1.5 million in the bank by mid-July.

Doing so is no easy task, particularly when it comes to convincing the kind of shrewd, deep-pocketed Republican donors — who are also weighing involvement in tighter Senate, House and governor’s races across the country — that a conservative candidate can buck history and overcome New York’s strong Democratic tilt.

“These people are investors. They don’t get themselves into a position to donate by throwing money away,” said Chapin Fay, a Republican strategist who worked on Mr. Zeldin’s first successful House race in 2014. “The work Lee has to do is to prove that there is a path.”

Despite Republican optimism, an August Siena College poll showed Ms. Hochul with a 14-point lead. And a recent special congressional election in the Hudson Valley, won by a Democrat, Pat Ryan, suggested that what once looked like a historically good year for Republican candidates may be less assured.

It is unclear how much help Mr. Zeldin may get from Republicans outside New York. The Republican Governors Association, the clearinghouse for chief executive races across the country, is capable of spending millions in races it believes it can win and appears poised as of now to take a pass financially on Mr. Zeldin’s cause.

During one recent briefing, officials for the group outlined 18 states they were focused on and prepared to spend tens of millions of dollars in this fall, including Arizona, Georgia, Ohio, Oregon, Connecticut, Minnesota, Texas and Wisconsin, according to a person familiar with the presentation. They made no mention of New York, or Mr. Zeldin.

Jesse Hunt, a spokesman for the governors’ group, called Mr. Zeldin a “strong candidate” and said it would be monitoring the New York race. Confident in Ms. Hochul’s standing, the Democratic Governors Association does not plan to invest, either.

Mr. Fay is doing his part to help fill the gap. He plans to roll out a new super PAC next week dedicated to deepening Republican inroads in Asian, Latino, Eastern European and Jewish communities in New York City where Mr. Zeldin needs to narrow Democratic margins. He aims to raise $1 million, and has already secured at least one six-figure check to fund multilingual messaging.

Two more party stalwarts, Edward F. Cox and John J. Faso, are raising funds for another, larger super PAC to back Mr. Zeldin and weaken Ms. Hochul on the airwaves. It remains unclear how much they can assemble, but the two men have deep ties to some of the party’s wealthiest donors from Mr. Cox’s years as the state party chairman. They also found success this spring financing a successful lawsuit that ultimately thwarted Democrats’ attempt to gerrymander New York’s congressional districts.

Mr. Zeldin’s campaign declined to say how much he has raised in recent weeks. A spokeswoman, Katie Vincentz, asserted that Mr. Zeldin had already raised more than previous Republican challengers, and was confident that he would “have all of the resources he needs to fire Kathy Hochul on Nov. 8 and save our state.”

She also accused Ms. Hochul of trying “to sell access to Albany” to potential campaign supporters, a perennial charge against New York governors.

Coming off an overwhelming primary victory in June, Ms. Hochul has spent the summer months jetting between California, the Hamptons and the Hudson Valley, using $10,000 cocktail party invitations to rebuild her own stockpile, which stood at almost $12 million in mid-July.

Though she only took office a year ago, Ms. Hochul has proved to be one of the state’s most aggressive fund-raisers in recent memory, pushing the boundaries of ethics rules and her own executive orders to collect large checks from business leaders, lobbyists and others with interests before the state. By mid-July, she had collected about 112 checks for $50,000 each, compared to close to 40 donations of a similar size collected by Mr. Zeldin, according to campaign finance records.

Ms. Hochul will also have some outside help. The carpenters union has pledged to spend $1 million for New York Democrats, according to The Albany Times Union. And allies of Mayor Eric Adams, including the Hotel and Gaming Trades Council and Local 32BJ of the Service Employees International Union, are also raising funds for a small Hochul-oriented super PAC. The group currently plans to spend six figures, but could scale up if the race tightens.

The PAC plans “to elevate Governor Hochul’s strong record on standing up for working people and unions, protecting reproductive freedom, keeping us safe by tackling gun violence, and delivering record funding for our health care and public schools,” said Candis Tall, the political director for 32BJ who sits on the its board.

Mr. Zeldin, meanwhile, has put together his own impressive run of high-dollar events.

He raised six figures last week at a carnivalesque event on Long Island. Hosted by the insurance magnates Steve and Carolyn Louro, the beachy “dinner party” in Nissequogue advertised fireworks, appearances by retired New York Giants and Yankees, speeches by Donald Trump Jr. and Kimberly Guilfoyle, and a test flight by the British inventor of a jet suit.

Mr. Zeldin’s campaign netted close to $1 million last Sunday at an event at the waterfront Oyster Bay estate of Matthew Bruderman, a wealthy financier. Donors shelled out $25,000 a plate for a “V.I.P. dinner” with Mr. Zeldin and Mr. DeSantis, who ultimately did not attend, and heard from Dan Bongino, the right-wing media personality.

This coming Sunday’s event in Deal, N.J., will be hosted by the Chera family, a prominent group of Syrian Jewish real estate developers whose firm owned the St. Regis New York Hotel and the Cartier Mansion. The patriarch, Stanley Chera, was a friend and political supporter of Mr. Trump who died in April 2020 of complications from Covid-19. Tickets run between $1,000 and $100,000 a couple, with varying levels of access to the former president.

Democrats have already used the event to renew familiar attacks against Mr. Zeldin as a far-right puppet of the former president whose views — including a House vote to overturn 2020 election results — are too extreme for the state.

“Zeldin will do and say whatever it takes to appeal to the far right, even if it means raising money alongside the disgraced former president,” said Jerrel Harvey, a spokesman for Ms. Hochul’s campaign. “His blind loyalty to Trump is too dangerous for New York.”

Mr. Zeldin’s allies said they were not overly concerned, particularly since Democrats would attack his ties to Mr. Trump regardless of whether they appeared together at a fund-raiser.

“I got this advice a while ago from a Beltway fund-raiser,” said Mr. Fay, the Republican strategist. “If you are already getting crucified for the person or the issue, then take the money.”

U.S. Will Set Aside Monkeypox Vaccines in New Equity Program 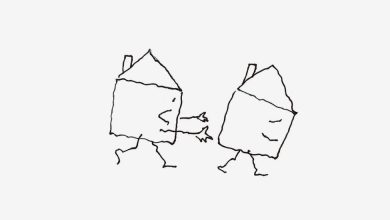 A Snap, a Punt, a Butt. Dolphins Make a Blunder to Remember 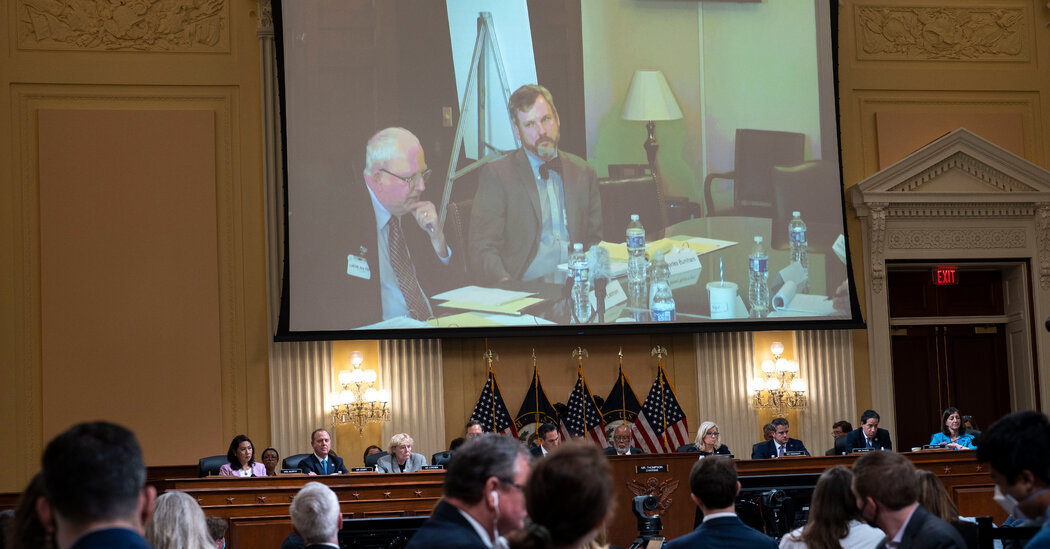