SCOTTSDALE, Ariz. — There are any number of reasons that this cute little Texas Christian University football team has elbowed its way into the College Football Playoff, the realm of the behemoths.

There is the plucky, carrot-topped Heisman Trophy runner-up quarterback, who was relegated to backup duty at the start of the season by the genius new coach, who is so good he once got fired at California.

There is the star receiver, a top N.F.L. prospect who didn’t opt for a bigger school that could funnel him plenty of cash. Then there is the rest of the ragamuffin roster that was picked to finish seventh in the Big 12, a conference so prestigious that its most noteworthy programs — Oklahoma and Texas — can’t wait to leave.

We could go on, but it still wouldn’t add up.

There seems only one reasonable explanation why the Horned Frogs are pitted against mighty Michigan on Saturday in a semifinal game at the Fiesta Bowl: the power of the Hypnotoad.

The silent (except for that guttural hum), sentient amphibian with the pulsating eyes and amorphous powers (projected from above) has provided T.C.U. with an incalculable edge this season. 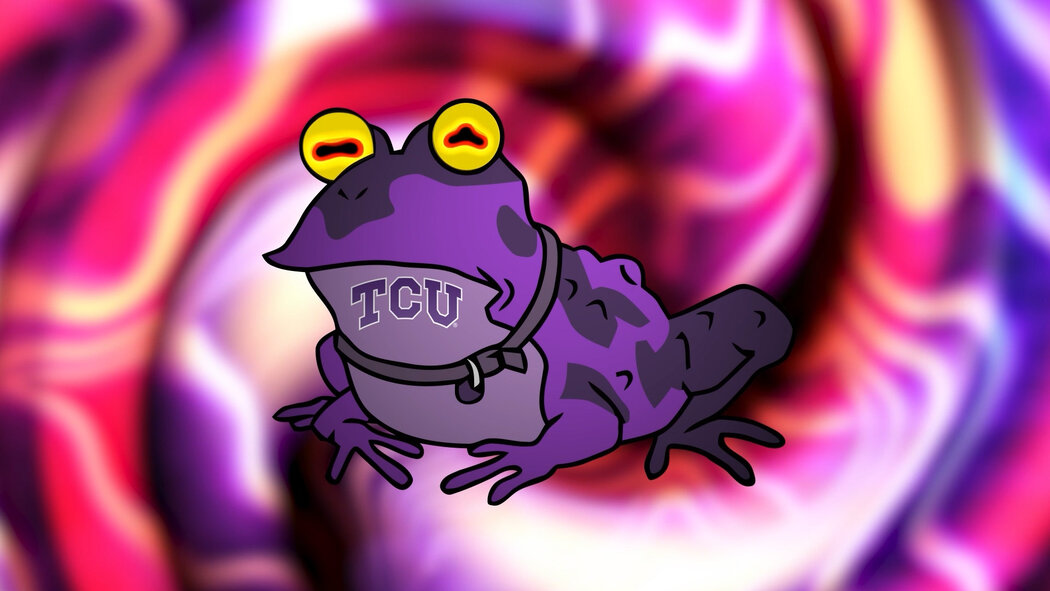 One of several Hypnotoad videos that T.C.U. has shown at its home football games.CreditCredit…via T.C.U.

How many points is the Hypnotoad worth?

(The Hypnotoad, it should be noted, apparently does not work overtime; T.C.U.’s only loss this season came when the Big 12 championship game against Kansas State required extra time.)

The Horned Frogs, who are the first school from Texas to participate in the four-team playoff, which began in 2014, and the second to do so after starting the season unranked, could hardly be more unlikely to have landed here. The same goes for their omnificent talisman, which was hatched far away from the football-mad state of Texas — in the comedic laboratory that is a Hollywood writers’ room.

The premise of the long-running animated show “Futurama,” the brainchild of the “Simpsons” creator Matt Groening, is that a pizza delivery guy is cryogenically frozen and wakes up 1,000 years into the future. So, of course, there’s room for the Hypnotoad, an ancillary character whose vibrating eyes can move sheep — and mankind, such as it will be — to extraordinary lengths, including inducing entire arenas to repeat the mantra: “All glory to the Hypnotoad.”

But this — a real, live football crowd rising in unison at the mere sight of an animated frog — may be even more surreal, life imitating art. 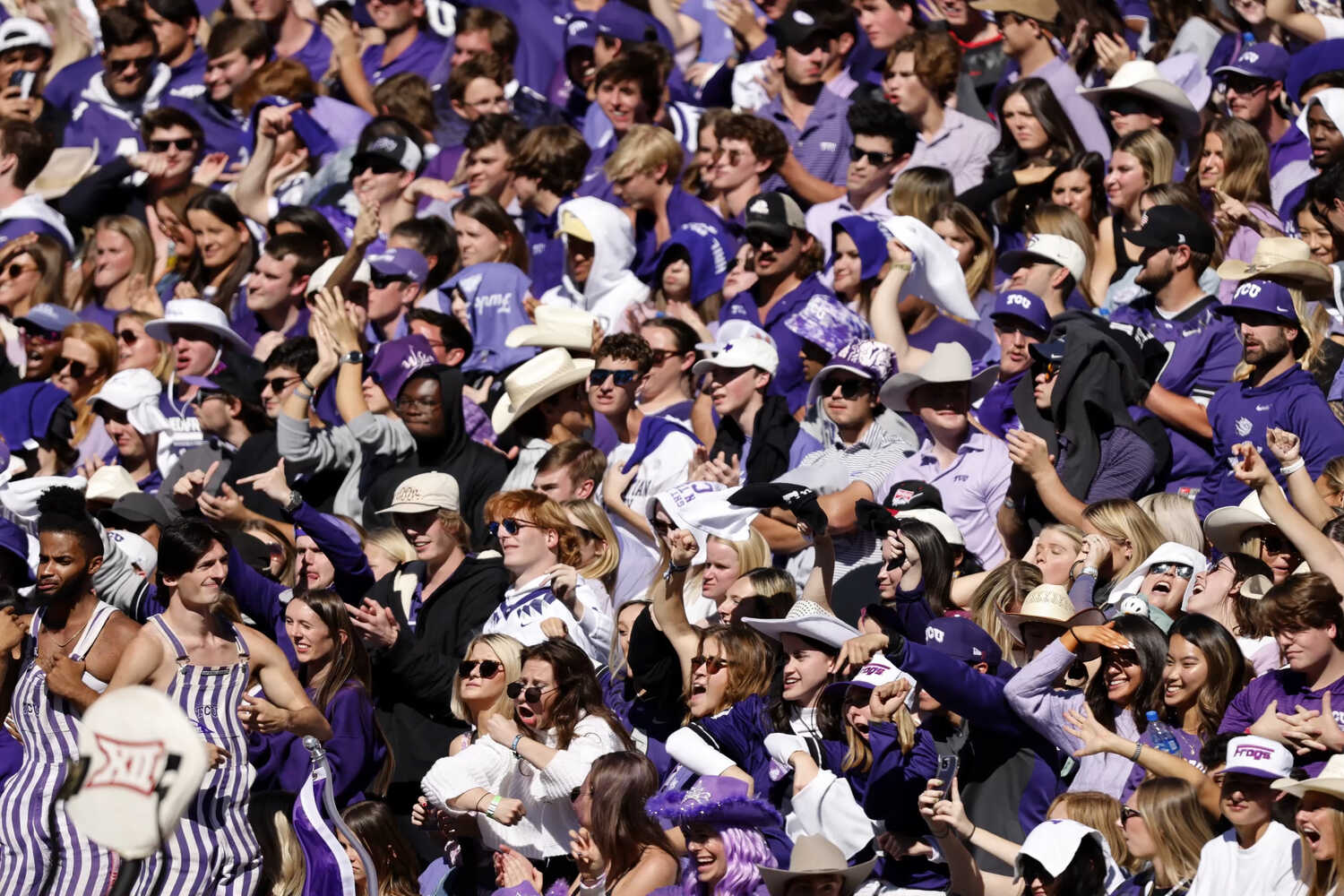 “The overlap of Futurama and the fandom of football — that’s a tight little Venn diagram,” said Eric Kaplan, the television writer whose germ of an idea was fleshed out by his collaborators into the Hypnotoad. He described himself as “stoked” about the character’s second act as a pigskin meme.

“That the fans of T.C.U. have taken a character who I created, and they’re sampling it and remixing it, and it’s become part of their emotional and athletic lives — it’s amazing,” Kaplan said in a phone interview from Romania, where was vacationing.

As it turns out, for the last decade, a fan of the show — Clayton Regian, who graduated from T.C.U. with a degree in film, cinema and video studies — has been embedded in the athletic department’s video production unit.

Back in 2015, a moment of inspiration hit when T.C.U.’s football team returned from a win at Minnesota and the video unit was charged with coming up with something clever to elicit excitement from the crowd the way the Golden Gophers had done by putting a giant, wildly popular meme of a prairie dog on the video board as T.C.U.’s kicker attempted field goals.

“I always thought Hypnotoad was a very funny idea,” Regian said. “Every single time you’d see a clip of Hypnotoad on the internet — it didn’t matter what site — the comments were the same: ‘All glory to the Hypnotoad’ was repeated. Everyone is playing with the idea that they’ve fallen under the spell.”

The Hypnotoad made occasional appearances on the video board at T.C.U. home games over the years, cooked up by a handful of video wizards. It surfaced at men’s basketball games last season.

This fall, after the new football coach, Sonny Dykes, had encouraged everyone involved with the program to let their creative flags fly, the Hypnotoad curiosity morphed into something else. As the Horned Frogs began the season with four victories, including a rout of Oklahoma, the appearances of the Hypnotoad on the video board transfixed the home crowd. The zanier — and more hypnotic — they became, the louder the crowd grew. And the louder the crowd, the better the Horned Frogs played. 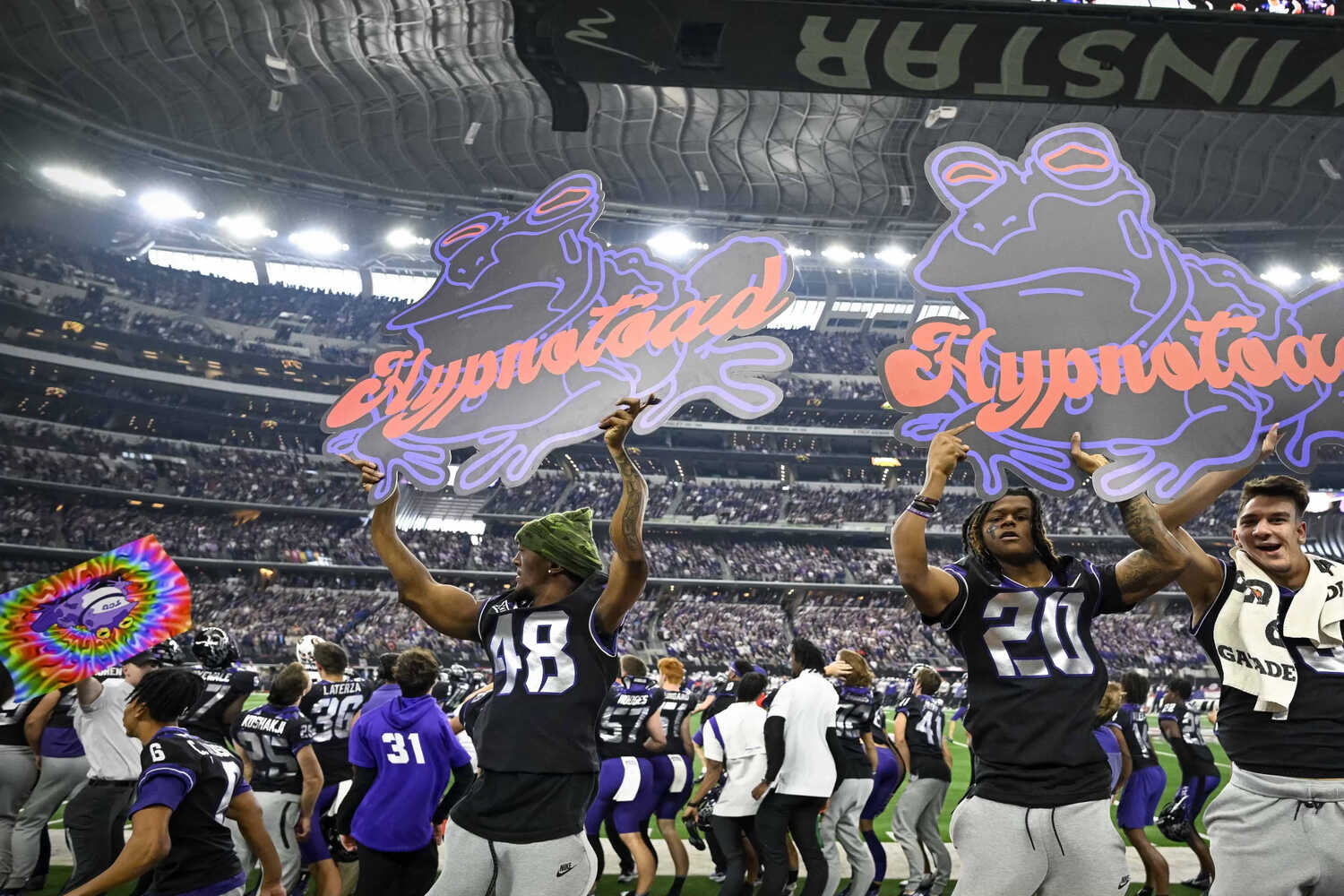 “One game, I’m standing on the sidelines looking up and thinking, ‘I don’t understand what it is, but it’s awesome,’” said Jason Andrews, the director of football creative media who oversees T.C.U.’s similarly smart, subversive social media account.

Wes Harris, an offensive tackle, recalled huddling with his teammates around the offensive coordinator, Garrett Riley, during a timeout in the fourth quarter against Oklahoma State when the crowd suddenly came to life. “I’m looking around to see if maybe one of the old players is walking out,” Harris said. “And then I look up on the screen and it’s: ‘the Hyp-no-toad,’” Harris said, lowering his voice to mimic the announcer’s dramatic, monosyllabic tone. “After that, it went crazy.”

When a photo of Dykes wearing a Hypnotoad sweatshirt to practice was posted on social media, it accelerated the phenomenon, and a local sensation became a viral one.

The players soon got Hypnotoad gear, which is popular enough around campus that some players say they have been asked to sell items for a couple hundred dollars. Max Duggan, the quarterback, showed up at a postgame news conference wearing a Hypnotoad T-shirt. (T.C.U. does not sell the gear because of copyright laws, but it has contacted Disney, which owns the rights and is moving ahead with a revival of “Futurama” for Hulu, about a licensing arrangement.)

Hypnotoad banners and signs dotted the crowd at the Big 12 championship game this month.

Dykes said on Thursday that at a place like T.C.U., which is in its fourth conference since the Southwest Conference dissolved in 1996 and has to fight for relevance in the Dallas-Fort Worth market, it was natural to embrace anything that helped forge an identity.

“We’ve always said, ‘OK, how can we get somebody to cover us? How can we get some fans to come to our games?’” said Dykes, who, in addition to California, has coached at Louisiana Tech and Southern Methodist. “The product on the field is always going to be the most important thing, but what else can we do to engage the fan base?”

He recalled a memory from his western Texas childhood. Whenever Midland Lee, the high school where his father coached, played Odessa Permian — in a rivalry famously captured by the book “Friday Night Lights” — his father’s team girded for the moment when the Permian band would play the “Hawaii Five-O” theme song, firing up the crowd.

“When you heard that theme song and you were playing Permian, it was kind of one of those deals where you were like, ‘You better hold on. Here they come,’” Dykes said.

This embrace of an animated, authoritarian frog makes sense to Kaplan, too, if for more esoteric reasons.

If, he said, religion was the externalization of community, as the French sociologist Émile Durkheim believed, what better place for the Hypnotoad to take root than in Texas, where God and football seem to be worshiped in equal measure.

And what better platform than the Fiesta Bowl, where the notion of communal passion is celebrated because — well, it’s only a game and not, say, the Crusades.

“Mind control has always been a fascinating topic,” Kaplan said of an Orwellian concern that turning on the television or going on social media might allow a malefic force into your brain. “The idea that you could have a toad that could control what you believed and wished and desired and dreamed of — it’s a very powerful character.”

Ah, but we digress to football.

Those hopes and dreams of a national championship, as fanciful as they might have once seemed for T.C.U. players, are now within sight. And so, even with a wink and a nod, the idea that the team is being driven by the appearance of a powerful force is one that the Horned Frogs are at least willing to entertain.

“One time, in the fourth quarter, I’m looking at it, and it’s messing me up,” said Quentin Johnston, the team’s star receiver. “I know the other team is getting messed up.”

Harris said that when an opposing player had been examined after a hit had left him woozy, he’d told his teammates otherwise. “The Hypnotoad got him,” Harris said. “It bamboozled him.” 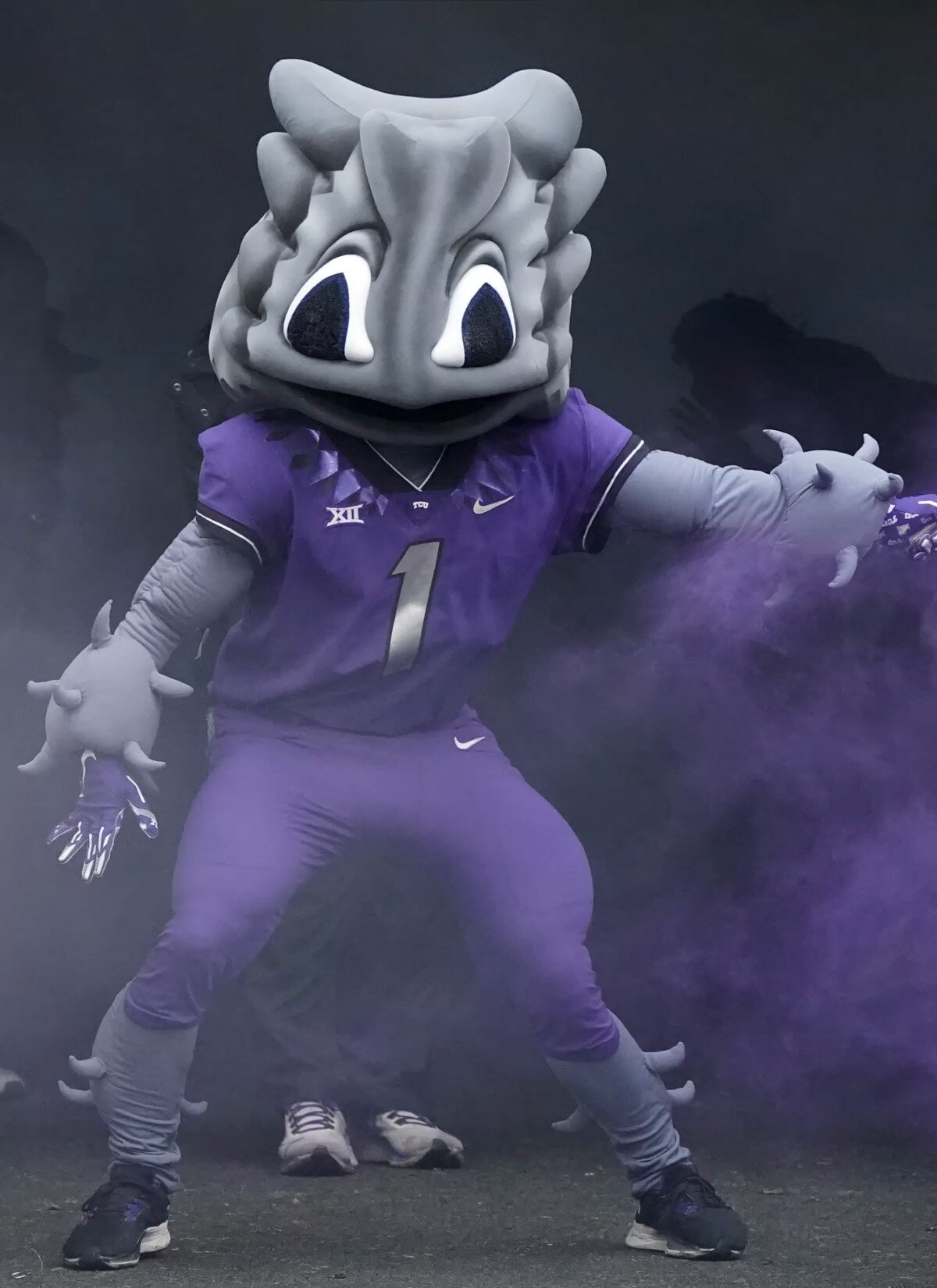 The official mascot for Texas Christian is SuperFrog.CreditCredit…LM Otero/Associated Press

It’s unclear how much help the Hypnotoad will be on Saturday.

There will be T-shirts and hoodies, banners and signs paying homage to the Hypnotoad, and ESPN, which is broadcasting the game and owned by Disney, is preparing a relevant segment. But whether the Hypnotoad appears on the video board is up to the game operators of the Fiesta Bowl, though they have been provided video clips.

When the Hypnotoad was explained to Michigan defensive end Mike Morris — it took a moment, and a glance at an image on a reporter’s phone — he scoffed. “We’re Wolverines, bro,” he said. “Try to put a screen in front of us and try to get us hypnotized. We’re just going to go blank and keep playing football. We’re trained soldiers.”

J.J. McCarthy, Michigan’s contemplative and meditative quarterback — that will be him, eyes closed, sitting cross-legged under the goal post before Saturday’s game — has seen cannons and fireworks at Rutgers and heard the third-down bell ringing at Ohio State. He has not yet been fazed.

But he had not, until Thursday, considered the power of the Hypnotoad.

“I appreciate the warning,” he said, offering a fist bump to a reporter. “I’ll be on the lookout for it.”

On that count, he will not be alone.

Tags
Game Play Said That Was 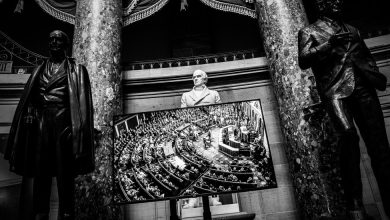 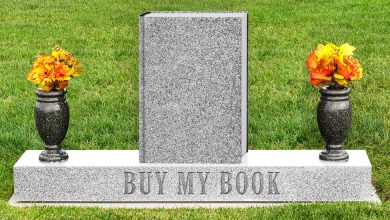 The Romance Novelist Who Faked Her Own Death 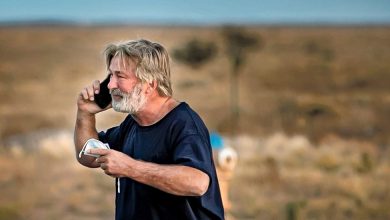 Alec Baldwin Didn’t Have to Talk to the Police. Neither Do You. 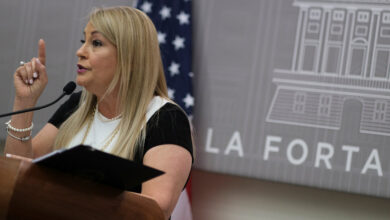