It’s the sad eyes. The pained smile. The shambling 6-foot-4-inch frame that he diminishes by caving in his chest. It’s his single season on the critics’ darling “Freaks and Geeks,” playing a puppyish high schooler; his nine seasons on the audience favorite “How I Met Your Mother,” as a loving, excitable husband and dad; his slate of rom-coms. If you saw the 2008 film “Forgetting Sarah Marshall,” which he also wrote, you spent 73 frames opposite his exposed penis during a mortifying breakup scene. And, most likely, you came out still liking him.

“I’ve built up some currency, some good will,” Segel said. “Like, ‘Oh, he’s a good guy; he wouldn’t do anything intentionally mean.’” This was on a January video call, and Segel was recounting an early conversation he’d had with Bill Lawrence and Brett Goldstein about their Apple TV+ sitcom “Shrinking.” The first two episodes premiere on Friday; eight more follow weekly.

Segel, 43, who joined the series as a writer, executive producer and star, opposite Harrison Ford and Jessica Williams, plays Jimmy, a cognitive behavioral therapist crushed by personal grief. A year after the sudden death of his wife, Jimmy self-medicates with pills, booze and some very polite sex workers. He is a neglectful father and a bad neighbor. His approach to patient care would make an ethics panel weep. Another comic actor might have tried to protect his likability. Segel, in this role, wanted to squander it.

“We have to use that for evil,” he recalled telling Lawrence and Goldstein. “We should spend that currency.”

Segel, who grew up in a comfortable, beach-adjacent neighborhood of Los Angeles, became a professional actor by inclination and deceit. He was an anxious kid, burdened from an early age, he said, by “a sense of impending doom.” Acting classes were a rare space in which he felt comfortable. By high school, though, his basketball schedule (he was, as his height suggests, a star) kept him from auditioning for most school plays. His theater teacher persuaded him to star in a three-night run of Edward Albee’s “The Zoo Story.” Without telling Segel, that teacher invited a leading casting director from Paramount, who liked what she saw.

“I’m baffled by people who take the bus to L.A. and say, ‘I’m gonna make it,’” Segel said, moving his thickly stubbled face closer to the camera. He wore a gray plaid shirt, his brown hair cresting high above his forehead, a wave that never broke. “That’s bravery. Me, I got really lucky.” 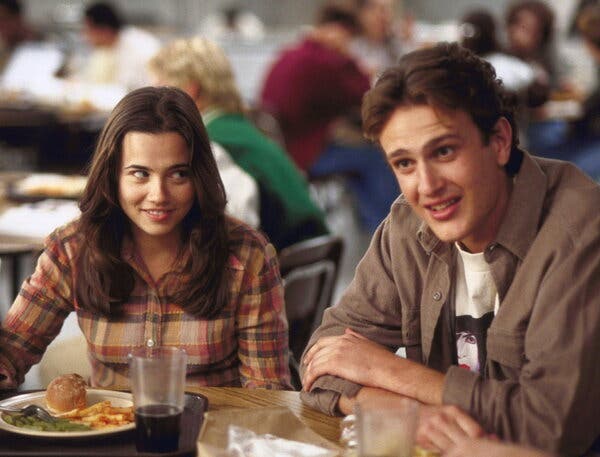 Segel and Linda Cardellini in “Freaks and Geeks,” which only lasted one season but remains a critical favorite.Credit…Chris Haston/NBC

He landed a role on “Freaks and Geeks” not long after. Precocious, he had a quarter-life crisis at 20, when that series ended after 18 episodes. He was too old and too tall to play more high schoolers and too young for anything else. Judd Apatow, the executive producer of “Freaks and Geeks,” encouraged him to write. A few years later, just after he was cast in “How I Met Your Mother,” he had begun “Sarah Marshall.”

Nicholas Stoller, who directed that movie, admired the script’s sweetness and Segel’s sweetness, too. The character Segel played, like many he had played and would play, verged on creepy and pathetic without tumbling over. “He’s willing to have his characters do bad stuff because it’s human, it’s relatable,” Stoller said. “But he just grounds it in kindness.”

That movie set the template for the next six years: Film the sitcom for eight months and then make a movie during the hiatus, often one that he had written or co-written. But when “How I Met Your Mother” ended in 2014, Segel, then 34 and still precocious, had his midlife crisis. This one felt more existential. He’d been acting for half of his life and figured he was good at it. And he’d written films he was proud of, like “Sarah Marshall” and the 2011 Muppets movie. But was this his purpose? Writing and delivering joke after joke after joke?

Segel explored the alternatives. Newly sober, he left Los Angeles, moving several hours north, to a property with orange groves. He chose projects more sparingly. To begin, he signed on to star in “The End of the Tour,” a movie about the writer David Foster Wallace. He hadn’t really done a drama since “The Zoo Story.” But he recognized parallels between himself and the film’s version of Wallace, who has just published his masterwork, “Infinite Jest.”

“It’s this moment where everyone is saying, ‘You’ve won life,’” Segel said. “And you are feeling so scared. Like, Oh, no. What’s next?”

“An audience will follow Jason Segel very far before they turn on him, and that’s a gift,” said Brett Goldstein, one of the “Shrinking” creators.Credit…Daniel Dorsa for The New York Times

He didn’t know. He wasn’t writing, and he didn’t find anything funny. But maybe he just didn’t want to write comedy, he realized, which led him to create “Dispatches from Elsewhere,” a 2020 limited series about four adrift souls ensnared by an alternative reality game.

“While it wasn’t the most commercial thing I’ve ever written, it was maybe the most meaningful,” Segel said. “I proved I could make something again.” He began to theorize that maybe he needed to make work that let him use more of himself — the comedy stuff and the not-so-comic stuff. He sought projects that encouraged him to be what a therapist might describe as “integrated.”

“Like, let’s make this one weird guy,” he said. “That’s maybe what the point of all of this has been about.”

That revelation led him first to “Winning Time,” the flashy drama about the Los Angeles Lakers (Segel plays an unflashy, melancholic coach), and then to “Shrinking.” Lawrence and Goldstein, who met on “Ted Lasso,” had each been roughing out separate shows about grief and therapy before deciding that they should make a show together. Segel was their first choice to lead it.

“Because he has that thing: He’s funny, he’s a great actor, inherently likable,” Goldstein said, adding a few expletives. “An audience will follow Jason Segel very far before they turn on him, and that’s a gift.”

Lawrence, on a separate video call, agreed. “He’s got this underlying vulnerability and it makes him so empathetic,” Lawrence said. “Even when he does something lousy, as his character, you go, ‘Oh, I wonder why he did that. Is he OK?’” Lawrence, who has multiple projects in the works, also liked the idea of an actor who could do some heavy lifting in the writers’ room.

Segel and Harrison Ford on the set of “Shrinking.” The show’s creators valued Segel’s ability to write as well as act.Credit…Apple TV+
In the series, Segel wanted to subvert his inherent likability. (With Luke Tennie.)Credit…Apple TV+

They pitched him the show. Segel was quiet on the call, so quiet that Goldstein worried that he didn’t like the idea. After a day or two, Segel accepted. He explained this delay as the upside of that midlife crisis: Now he takes his time choosing his jobs. But he knew he would take the part as soon as he heard the pitch. “Shrinking,” he realized, would require both nanosecond comic timing and deep sensitivity. He would have to make an audience believe that this was a man overwhelmed by grief, and then make that grief funny without ever cheapening Jimmy’s pain.

Pain interests him. It’s often the first question he asks himself about a character: How is this person suffering? And he figured that years into a pandemic, the audience for “Shrinking” might also be in pain. He has always seen himself as the kind of actor who functions as an audience surrogate — he mentioned Tom Hanks, Jimmy Stewart, Kermit the Frog. If a viewer could see Jimmy working through his pain, maybe that viewer could do some work, too.

“What a crazy, sad couple of years,” he said. “To find a way to laugh about this together is really hard and potentially really special.”

This is where the evil comes in — Segel didn’t want to make safe choices. The character had to feel volatile, even dangerous, if only to himself. Only by showing Jimmy at his absolute worst could he show the character starting to build himself back up again. On set, Segel leaned into this, so far that he sometimes fell over. Lawrence recalled shooting a scene in an early episode, in which Jimmy shouts at his next-door neighbor Liz (Christa Miller, Lawrence’s wife).

That antagonism was only for the camera. “I was surprised at how comfortable he is to act with,” Williams, his co-star, said. “There was nothing that I could do that he didn’t understand and that he wasn’t able to catch.”

Segel has increasingly sought out projects that blended his comic and dramatic abilities. “Like, let’s make this one weird guy,” he said.Credit…Daniel Dorsa for The New York Times

Nearly everyone I spoke to described Segel as a man who had “done the work”: who had become comfortable enough in his own skin, with or without professional help, that he could extend generosity and compassion to himself and others. He didn’t speak much about his personal experience of therapy (which suggests the kind of healthy boundaries that a good clinician would encourage), except to say that it had helped alleviate some of that existential dread and that he was thankful for it.

James Ponsoldt directed Segel in “The End of the Tour” and in several episodes of “Shrinking.” Looking at Segel through the camera’s lens, he said, “I see someone who’s grateful to be alive, someone who has lived and knows that being alive is better than not being alive.”

An actor is not necessarily the characters he plays, but Segel understands nearly all of his roles, Jimmy included, as versions of himself. He views his life (and this is arguably a little less healthy) as a series of minor and major embarrassments that he can funnel into art. The other day, he said, on vacation, he’d gone for a run on the beach and fallen on his face in front of several onlookers. Another man might have felt shame; Segel figured he could probably use it.

Probably he will. The stage and the set are the places where he has always felt best able to transmute dread or low-key humiliation into something that might make someone else feel a little better. It makes him feel better, too.

Williams recalled their first day of shooting. It was a tense scene and she felt nervous, awkward. But Segel reassured her. Soon they were riffing.

When “cut” was called, she turned to him and said, “Acting is really fun.”

He looked at her, she recalled, and thought about it for a while. And then he said, “Yeah, it really is. It’s like the funnest thing on earth.”

Tags
Make That This Was Who 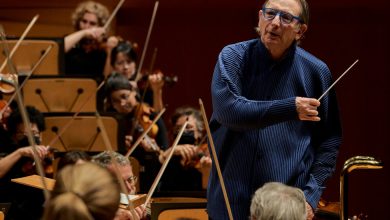 A Mighty Generation of Musicians. A Moving Final Chapter. 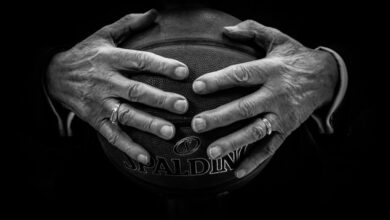 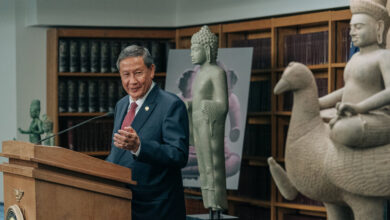 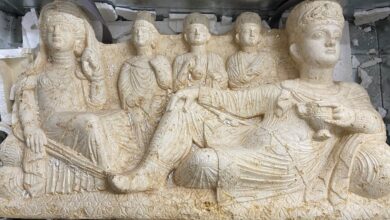 Investigators Say Collector Had Suspect Art and Lots of Chutzpah