Alvin Singleton completed his fourth string quartet, “Hallelujah Anyhow,” in 2019. But his first — simply named String Quartet No. 1 — was finished back in 1967. Those two, along with the others in between, have never been collected together before now.

Aside from a recording of Singleton’s third quartet, “Somehow We Can,” which was featured on a disc from John Zorn’s Tzadik label in the early 2000s, there haven’t been many chances to hear this music. (The same goes for other Singleton pieces, like his piano concerto “BluesKonzert,” which has been recorded memorably by the Detroit Symphony Orchestra and Ursula Oppens.)

In sharp liner notes for this album, the composer Carman Moore describes Singleton’s creativity as possessing “that special African-American attitude both of make-do and of derring-do.” Evidence for that crops up all over this portrait album from the Momenta Quartet. They produce a polished ease during sections of knotty polyphony in the first quartet, and bring gravity, as well as explosive intensity, to the second, “Secret Desire to Be Black.” The players stack up well against the quartet featured on the Tzadik recording of “Somehow We Can,” when it comes to the jagged dynamic transitions.

And “Hallelujah Anyway” seems like a summation of Singleton’s talents — as though he’s looking again at aspects of prior quartets from his half-century-plus career and compressing insights, both old and new, into a single work. SETH COLTER WALLS

The venerable ensemble Musica Secreta’s name is inspired by the mystery that still surrounds the music written by and for Renaissance and Baroque women. The group’s latest album presses into tantalizingly early repertoire from around the turn of the 15th century. It is dominated by a few rare polyphonic settings of psalm antiphons — chants sung alongside psalm verses — that are believed to have originated in Italian convents, one in Verona and one in Florence, where Galileo Galilei’s daughter ran the choir. Among these is a setting of the “Vespers of St. Lucy” that has an almost folk, tangy simplicity and transparency; two sets of Vespers for St. Clare are more polished and pristine.

The composers of two songs in the vernacular span the social spectrum: One, playfully elegant, is by Marguerite, Queen of Navarre, and the other is by Martha Baerts, a lady’s maid. There is also a selection of shining motets, two attributed to Leonora d’Este, Lucrezia Borgia’s daughter, who may have also been the recipient of Maistre Jhan’s gorgeous “Ecce amica mea.” Joanna Marsh contributes a dusky new piece, its text a blend of contemporary and 17th-century poetry. To Laurie Stras we owe the performing editions (including light accompaniment for harp, organ and bass viol) as well as the direction of this precise, intimate and unaffected gathering of voices. ZACHARY WOOLFE

When it came to choosing texts, Benjamin Britten wasn’t shy. He set the words of some of the most revered poets in the English language: Shakespeare, Donne, Keats, Blake, Auden.

Staples presents a pretty version of the tight, adenoidal school of British tenor singing typified by Ian Bostridge. He glides through punishing high passages with a buttery mixed voice, and his crisp diction — with consonants placed just so and vowels shooting beams of light — betrays his former life as a boy chorister at St. Paul’s Cathedral in London.

His refined, surgically precise performance ticks off seventh leaps, endless passaggio singing, clean runs and, in “Phrase,” a pianississimo high B flat. Only the brutally written “Dirge” brings out rough cracks in his vocalism’s delicate veneer.

The Swedish Radio Symphony Orchestra, led by Daniel Harding, is a lively presence. The set builds patiently: The chimerical string orchestra of “Les Illuminations” adds Christopher Parkes’s splendid horn in the Serenade and then fiercely independent winds, harp and timpani in the Nocturne. The gradual accumulation of colors takes us from Rimbaud’s surreal dreamscapes — Britten’s rare foray into French — to the restless, waking world of Shakespeare’s Sonnet 43, which concludes a finely wrought album with pounding blows and shards of light. OUSSAMA ZAHR

The cover art of this digital-only release shows Gustavo Dudamel fixing us in a pensive gaze, gray speckling those formerly exuberant curls and an index finger propping up his forehead. Behold, the photograph says: The hotshot has become an interpreter, grizzled and wise.

If there is plenty of evidence of the Dudamel of old in these accounts of the last three Dvorak symphonies, though, there is not much proof of the stature to which the photography aspires. Recorded live at Walt Disney Concert Hall in February 2020, the orchestra is accomplished in its playing and sometimes thrilling in the moment; as ever, Dudamel sounds most comfortable whipping up a brazen accelerando or detonating yet another explosive tutti.

But what else is there? Dudamel is evidently not interested in the minute care for phrasing, dynamics or sonorities of some of his colleagues; compare this Eighth to that on Reference Recordings from Manfred Honeck and the Pittsburgh Symphony Orchestra, and you find that there is no comparison at all. And though there are times when Dudamel does restrain himself from the exhibitionism that mars the first movement of his Ninth, the result too often is faceless and bland. It’s distinctly underwhelming, as too many standard-repertoire releases from big-name conductors on Deutsche Grammophon have been of late. DAVID ALLEN

“A Series of Indecipherable Glyphs”

The latest release from NakedEye, the Pennsylvania-based group, leans into the contemporary classical-goes-rock conceit, particularly in its early going. There, you’ll find a complex item by Frank Zappa (“Sinister Footwear II”), as well as “Amalia’s Secret” — a 1990s work of 10 miniatures from the composer and guitarist Nick Didkovsky, all of it generated by his software Nerve2.hmsl. (Think algorithms meeting chance operations.) That method winds up generating plenty of kick and surprise. But I prefer Didkovsky’s other music, like the 2020 album “LOUD,” from his Doctor Nerve project.

To my ear, it’s on the final five tracks of the NakedEye album — representing the majority of its running time — that things open up. The composer Whitney George wraps some ghostly mystery around regular pulses in “[These Hands] Hold Nothing.” Rusty Banks’s “Dum Spectas Fugio” uses ticking clock sounds and electric bass to create grooves that can conjure turntablism, the Minimalism of Marc Mellits and some gentler moods. Aaron Jay Myers’s “Strabismus” suggests an affinity with some of Zappa’s notated music but sounds less self-consciously zany. And substantial works by Molly Joyce and Richard Belcastro — all richly interpreted by NakedEye — round out this adventurous recording. SETH COLTER WALLS 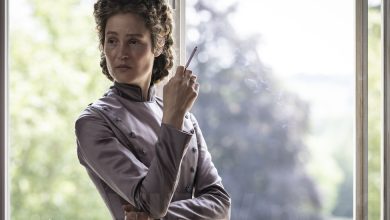 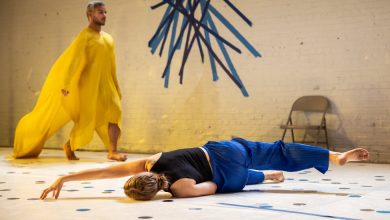 Review: In ‘Folds,’ Caught Between Laughter and Grief 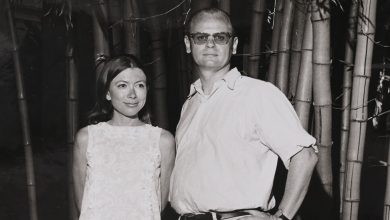